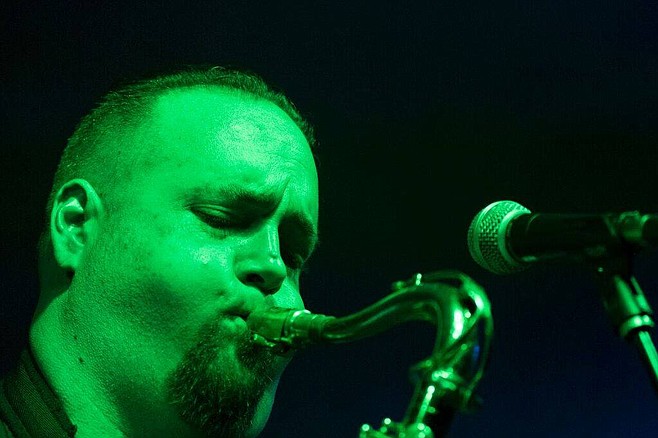 Formed in 1992, “San Diego’s mutated ska collective” Unsteady hasn’t seen the light in years, but they were one brassy blast back in the day, invoking “bordertown radio-to-jump” to move your shoes.

Later, drummer Jimmy Boom replaced Graves, and new members were added like Clay Elliot (sax) and Jon Fisher (trumpet). Their 1996 debut album Tightrope (Immune Records) was followed by Double or Nothing (1997) and Live in the Studio (2001).

“We used to open up for the Untouchables, Fishbone, and Bad Manners,” John Roy told the Reader. “We‘d play the Belly Up, [the long shuttered] Bacchanal, Winstons, and the old Casbah. We played Iguana’s [in Tijuana] five times. I opened for Bad Manners and Skatalites at UCSD’s Price Ballroom. It was sold out. What a sweat box.”

Unsteady eventually became (mostly) inactive, with Roy going on to play with Fearless in Fairweather, as well as reuniting with Hewitt in Self-Made Men, while Howland DJd as the P-Man Show.

They reunited to play several live shows in summer 2010, continuing to get together from time to time. 2017 saw the release of a split single featuring Unsteady’s song "Liar" and a new Manganista track, "Mr. Who," pressed on randomly colored vinyl to make every record unique. Subsequent gig dates found vintage members John Roy and Kevin “Baby” Hewitt now reunited with bassist Paul Howland, although Howland was playing guitar this time around, along with a band that fluctuated from six to nine or more members.

As of 2018, Roy’s longest serving bandmate was Guitar Center employee Kevin Hewitt, who plays the Hammond B-3 organ. “He joined in 1995. It’s an odyssey to carry an instrument that weighs 300 pounds with you every time you play.”