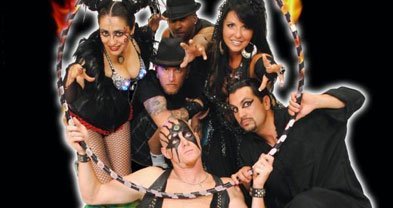 “I’m not a zapatero by trade,” says sitarist Rama of the beat-heavy world-fusion band Universal Beats Universal Vibe, “but everything we do we do 110 percent. With our costuming and everything, we go over the top, and that’s what we want to do with the boots, too.”

Rama and his wife Zulema are preparing to retail their handmade go-go UBUV boots, which have glowing LED lights on the soles and around the calves and feature an optional custom logo side panel to be used for promotional purposes. Because the boots are currently being made by hand in their downtown loft space, a pair of UBUV go-gos are retailing for $500–$600. The couple is looking to outsource manufacturing overseas sometime next year in order to streamline production and make the flashy footwear more accessible. Rama expects to be able to retail a pair for closer to $300 in the future. They also plan to produce a men’s motorcycle edition and boots with multicolored lights.

“It all ties into how we can think outside the box and bring more attention to our group, get our message out there, and bring the world together,” says Rama, who started playing the sitar in 1996 after a trip to India with his father.

“The name says it all: Universal Beats, Universal Vibe. Just taking music from different parts of the globe...showing people overseas that Americans do care. We take pieces of their culture and mix it with ours with the common goal of opening people’s hearts and minds to a peaceful world.”

The boots, available at UBUVboots.com, have appeared at UBUV’s performance at San Diego Indie Fest, a promotional event in Beverly Hills with Dennis Quaid, a 3-D video with DJ Swamp, and at a downtown 2010 rooftop show featuring Circa Now.