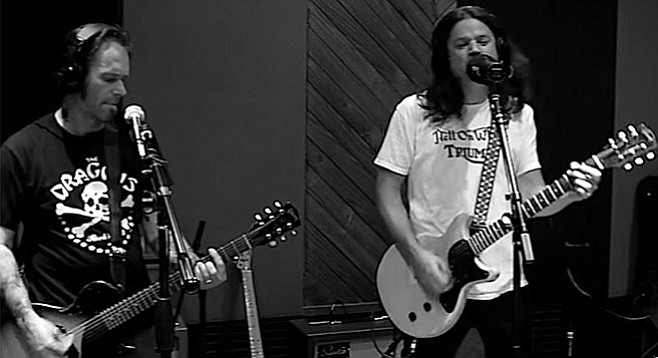 The classic lineup for Uncle Joe's Big Ol' Driver featured Minneapolis transplant Dave Jass (an early Soul Asylum member), and Portland refugee Andrew McKeag (later of Presidents of the United States of America), alongside Paul Brewin (later replaced by John Spezza) and George Vidaurri. After releasing several 7-inches between 1992 and 1995, as well as a self-titled debut full-length, they relocated to Seattle and released Chick Rock (Headhunter/Cargo Records), produced by Kurt Bloch. However, members ended up splitting into different ensembles.

UJBOD began to perform sporadic reunion concerts in 2006. While most shows were local, they also opened for the Muffs in San Francisco in 2011. “We never really made a decision of any kind to make it a more regular thing,” said McKeag. “Tim [Mays] and others kept asking us to come play a gig here and there, and it was so much fun we couldn’t say no.”

In 2012, the band returned to the studio for the first time since 1995 for Portland-based Red River Records, who were re-releasing the band's first two albums at the time, with a lineup featuring Andrew McKeag, guitarist Dave Jass, bassist George Viduarri, and original drummer Paul Brewin (who left the band after their first album). At the time, Brewin and Viduarri both lived in San Diego, McKeag in Seattle, and Jass in Minneapolis.

As of 2016, bassist George Vidaurri was also playing with Low and Be Told, featuring singer Doug Thompson (the Marsupials), guitarist Frank Blackcat, and drummer Darrin Lee (Tragic Tantrum, Roxy Jones). That band made its live debut in April 2016 at the Whistle Stop.