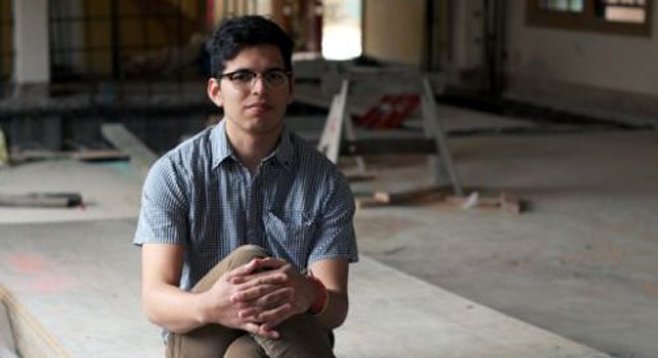 The music La Jolla via Mexico City bedroom dreamer Twin Cabins (Nacho Cano) is often called chillwave, though he cites surf music as his frequent frame of reference. "I guess the surfy influence comes from riding my bike near the beach. I gave surfing a shot when I first moved to the United States and I found great difficulty in it. I caught a couple of waves and shortly thereafter accepted that that was as good as it was going to get."

"I get classified as chillwave. But, in truth, I’d like my music to be labeled as anyone would like to. I’ve been classified as dream-pop, and I think that is the one that I most agree with. Simply because dreams are everything my music is about."

Cano was 20 years-old when he released his 2012 full-length I’m Sure. "I used an old Alesis SR-16 to make it sound super ’80s. I mainly used really cheap instruments when I started making this album. An old Washburn with really bad pickups [hence the fuzzing in the background], because of that I relied heavily on my effects pedals. An RV-5, Line6 DL4 (Best), and a simple OD Pedal. I really wanted it to feel stripped down and somewhat raw, but then I got a nice guitar and started polishing it up. A Taylor hollow-body electric."

As for the bandname, "To be honest, it wasn’t anything life changing or significant it was just that some years ago I was trying to start a band with a friend and we called ourselves Turtle Island, named after my favorite Beach House song. He didn’t like it and in the end abandoned the project. Then one day I was at the Museum of Contemporary Art and I had a friend who was re arranging words on a piece of large paper. She put the words Twin Cabins together and I really liked the way that the two words sounded together so I decided to name my band that."