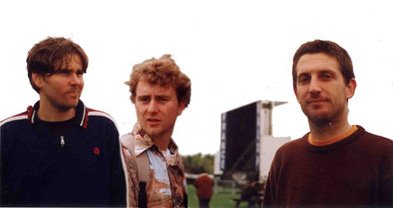 Trumans Water formed in April 1991, around a core membership consisting of brothers Kirk Branstetter and Kevin Branstetter. Others who've come and gone through the years include Glen Galloway, Ely Moyal, Andres Malinao, and around a half-dozen others. They have also collaborated with other performers such as Thurston Moore of Sonic Youth, Azalia Snail, Brendan Bell, and Jeff Fuccillo.

Fans of the band include Beck and renowned radio DJ John Peel, who played their debut LP Of Thick Tum in its entirety on his BBC Radio One show, effectively handing the band an instant and huge U.K. following.

Former guitarist Glen Galloway left the band and renamed himself Glen Galaxy, in order to form Christian hip-hop outfit Soul-Junk, which began recording musical versions of books from the Bible. "One day we drove from Louisville to DC, and I read the whole gospel of Luke start to finish. The next day we drove from DC to Chapel Hill, and I read the book of Acts start to finish. For the next 3 days I heard God telling me it was time to leave Trumans and start a gospel band. Which was crazy because lots of what I was writing at that time were 7-minute spazz/noise freakouts. Gospel seemed like the furthest thing away. All of a sudden God started giving me the songs. They were gospel. But they were weird and raw and not like any other gospel songs. So I told the rest of the band I was leaving. I did one more European tour right after that, and then left and started Soul-Junk.

Brothers Kirk and Kevin Branstetter relocated to Portland, Oregon, becoming the only original members still active in the band. Kevin later moved to France, as the band's shows became more infrequent, at least in the U.S.

2017 saw the release of a "new" Trumans Water album, Live in Oslo, recorded in Norway twelve years previous. The Branstetters reunited Trumans Water for a few U.S. dates in support, including at Portland's Turn Turn Turn, a music and vintage clothing shop that serves beer and hosts live music, and another show in Missoula. This version of the band included Mike Coumatos on bass and Red Fang's John Sherman (who last played with the band on the Oslo tour) on drums.