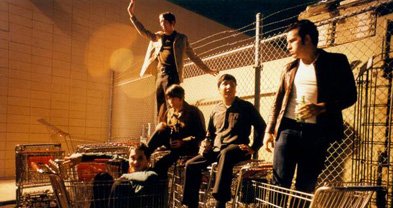 Influences: American Analog Set, Bedhead, Black Heart Procession, Black Rebel Motorcycle Club, Blonde Redhead, Bobby Conn, Bright Eyes, the Faint, the Get Up Kids, Guided by Voices, HiM, Interpol, Jimmy Eat World, the Locust, Mouse on Mars, the Rapture, Three Mile Pilot, And You Will Know Us by the Trail of Dead, Trans Am, Yo La Tengo

In 1998, Tristeza toured the U.S. extensively while fine-tuning songs for their first LP, Spine and Sensory, recorded by Tim Green at his Louder Studios in San Francisco. Makoto Recordings released the album in April 1999, while the band remained perpetually on tour.

In April 2000, the group took two weeks off, mid-tour, to record their second full-length album, Dream Signals in Full Circles, with producer Dave Trumfio at his King Size Sound Labs in Chicago. In early 2001, Tristeza headlined tours in Europe and Japan for the first time.

After the Dream Signals in Full Circle tours, the group took time off from performing to record some experimental material with Matt Anderson for release on his Gravity label. The Mania Phase 12" and the Mixed Signals remixes collection were released early in 2002. Around this time, Stephen Swesey left the band and was replaced by tour keyboardist Eric Hinojosa. Swesey has since performed spordically with the electronic duo Languis.

At the beginning of 2003, James LaValle played his last gig with the group in order to focus on his Album Leaf project full-time. The group took time off from performing live, and in 2005 guitarist Christopher Sprague moved to Oakland. A year later, James Lehner moved near San Francisco, and then back to Michigan, as he prepared for and adjusted to fatherhood. This left bass player and founding member Luis Hermosillo the only member of Tristeza who stayed in the area.

The distance is a “challenge” for the band, according to lead guitarist Christopher Sprague. “Luis and Jimmy [Lehner] and myself have a great connection and friendship. The music seems to keep coming. Until I feel we don’t have anything interesting or new left to say through our songs, it will keep coming.”

A good amount of time was also needed for the other members to rest and regroup. The band chose to release another 12" on Gravity, Espuma, which features previously unreleased songs, live material, and the group’s first song recorded without LaValle, entitled “This Trap.”

In 2004, Tristeza began writing and rehearsing a second batch of songs for the new album with keyboardist Sean Ogilvie and guitarist Alison Ables. A Colores was released on November 22, 2005, on Better Looking Records. The group released En Nuestro Desafio, a CD/DVD package, on the same label on August 22, 2006.

Tristeza’s album Fate Unfolds was released in December, 2009. A song from the album, “Manitas,” was selected as audio for It’s Not Where You Go, It’s How You Get There, a skateboard film featuring Encinitas pro Kyle Leeper.

The band’s digital label, Better Looking Records, which also releases recordings for San Diego bands No Knife and the Album Leaf, set the deal up early this year.

“The filmmakers are familiar with Tristeza,” writes record-label owner Paul Fischer, “and [‘Manitas’] fit with what they are doing and [Leeper] was into it.”

Added Tristeza drummer Lehner about Leeper skating to their song: “We don’t personally know [Leeper], but the dude is a shredder for sure. We’re honored.”

The band released a new album in 2010, Paisajes.