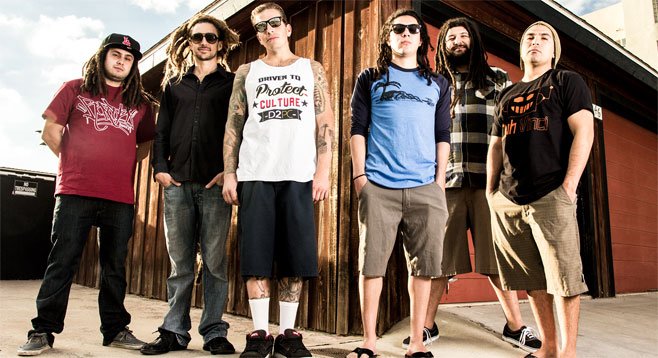 Based in Chula Vista, Tribal Seeds were founded by two brothers, both raised playing instruments since early childhood. Lead singer Steven Jacobo writes the lyrics for the group, and his brother Tony-Ray Jacobo produces their music. They have toured throughout North America as well as Mexico and Hawaii and have shared the stage with Matisyahu, the Wailers, and Gregory Issacs, among others.

The band’s debut, self titled album was released in 2008. In September of that year, they won a Best World [Music] trophy at the San Diego Music Awards. A second album, The Harvest, was released in June 2009, containing fourteen new and original songs and debuting at number five on the
Billboard Reggae Charts. The tracks, written and produced by Tribal Seeds, were recorded and mixed by Alan Sanderson at Signature Sound Studios in San Diego, and mastered by Erik Lobson at Universal Mastering.

Their Autumn 2011 tour featured 25 dates in two months, kicking off in Tucson, Arizona at the Rock on October 12, in support of their EP Soundwaves, which peaked at number two on the Billboard Reggae Charts.

2013 found them welcoming a second singer, E.N. Young, intended to share lead vocals with Steven Jacobo (as well as sharing his recording studio Imperial Sound, the most Southwest recording studio in the United States).

That October, they won Best World Music at the San Diego Music Awards. Their next national tour kicked off January 8, 2014, running through April and featuring the live debut of tracks from their upcoming album Representing, recorded at Imperial Sound.

The release party for Representing was May 2, 2014, at SDSU's Open Air Theatre. With this new album, Tribal Seeds decided to invite some of their closest friends to guest-perform, including Vaughn Benjamin of Midnite on the title track as well as past tour mate, Kyle McDonald of Slightly Stoopid on "In Your Area." Reggae greats Don Carlos & Michael Rose are featured in "Blood Clot" and Herb Stock" respectively. New Kingston makes an appearance on "Fill It Up" and Tribal Seeds guitarist, Gonzo displays his singing talent in the song "Undercover Lover," his vocal debut on a Tribal Seeds album. Along with Gonzo, Tribal Seeds' Tony-Ray also makes his vocal debut on "Rock The Night."

After releasing a video for “Fill it Up,” they spent the summer touring with New Kingston, kicking off in August. Representing debuted at #1 on the iTunes Reggae chart and #19 on iTunes overall, as well as scoring #1 on the Amazon Reggae, Roots Rock, & Carribbean sales ranking. It also won a 2014 San Diego Music Award as Best World Music Album.

Two members had sophomore solo releases in late 2014: Gozo's Red (which debuted at #1 on the iTunes Reggae Chart) and E.N. Young's Live Love Stay Up.