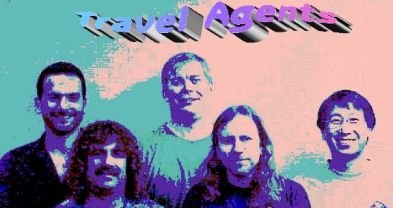 Sound description: Like being at a Dead show...only Travel Agents remember the words!

Largely influenced by the psychedelic sounds of the late '60s and early '70s, the Travel Agents' music has evolved into a mix of danceable rock and roll and good-time originals. It's hard to pin down exactly when the band began. It had existed in various configurations since 1986, but 1990 was the year in which the band became what people now know as the Travel Agents. The music finally began to gel, regular rehearsal began, and real paying gigs came soon thereafter.

"The [band] name was adopted from a classic Dragnet episode that dealt with psychoactive drugs like LSD," says drummer Frank Lazzaro, "and 'travel agent' was a term for someone who guided you on your trip, so to speak. It could refer to a dealer, or also a spiritual guide, such as a Timothy Leary type. The show was so absurd and comical, with the Dragnet cops asking tripped-out dopers, 'Who's your travel agent, kid?' Since the band does psychedelic music in the style of the Grateful Dead and other bands from that era and genre, we decided it was a good fit. Ironically, I have since become an actual travel agent."

The two-decade-long musical team has only changed once, with the with the departure of guitarist Paul Kelly, who moved to the Bay Area in 1995, and the addition of Scott McDowell in 1999.