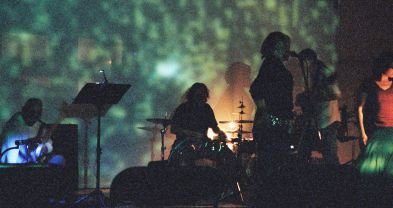 Translation Has Failed - originally known as Ogd_S(11) Translation Has Failed - formed in late 2005 for a performance at Voz Alta. The members had previously performed together in different groups, all of them reportedly dysfunctional. “This group started as a chance to delve deeper into issues concerning text and music and their integration,” says former San Diego drummer, vibraphonist, and composer Nathan Hubbard, aka Shadowfigure.

“One of the major factors for this group is that the music is more important than the lineup, so members names are rarely mentioned…the members have chosen to remain anonymous for several reasons: as a means to escape the trappings of the consumer music industry, to keep the group from being judged by the members’ previous work, and, hey, because it’s fun. The music is a blender of interests. On a tempo map, you could rate it from seriously slow doom-metal to quite fast drum ‘n’ bass. Layer onto that the hippest DJ in town and a poet who is not afraid to speak her mind, and you get an idea of what it sounds like.”

As for the band’s moniker, “The name was a flash of inspiration, or maybe just an attempt to escape the trappings of the usual names. I had no idea how much this would freak people out. I’ve had several club owners/promoters completely balk, not use the band name, or list the band as Nathan Hubbard Group. For me, I have a lot of ideas and interests, and have made a decision to divide these interests into different bands. When I started this group, I was militantly not using my name, and it was great to see people’s reaction to the music. Good or bad, it was completely honest.”

In April 2007, the group released an EP, If Memory Serves, featuring the sounds of pre-digital drum machines.

“I love that part. We originally recorded it with myself playing acoustic drums, but it worked better with the Casio. My function in this group is equal parts drummer and producer, and I have no drummer ego where I need to be featured. And I’m a huge fan of pre-digital electronic drum sounds. For example, the sound of a Casio drum machine might remind you of listening to music in an elevator. You notice that many artists are using these machines with an ironic, tongue-in-cheek approach. This is not the case with this record. I love the Bossa Nova and the Casio drum machine, and the two together are like peanut butter and chocolate.”

Early 2012 saw a full length, This Middle Ground, which Hubbard describes as Bossa Nova/doom metal /opera. “I should say that the Bossa/doom/opera moniker is used mostly to open a door for people to step through. There are a bit of those genres in the music, as well as several others, but the larger scope of the piece is that it is a collection of songs about lost love. These pieces were written as a complete suite to give a larger picture of the topic, hence the opera moniker. And, if you’re writing songs about lost love, what better setting than the lilting subtleties of the Bossa Nova, or oppressively slow atmospheres of doom?”

New Encinitas, released in April 2013, was a collaborative recording with the PHX based group the Scorpion Decides that coincided with that group's first West Coast tour. The album was produced by Shadowfigure, mixed by Nathan Hubbard and Rufino Rodriguez, and recorded in part in San Diego at Singing Serpent and Floating Lights Studio.

In Autumn 2013, the group released Three Lifetimes in the Span of a Passing Train (Ambient Works Volume 1), featuring two lengthy tracks, followed shortly by Leftstump, an archive recording of pieces made circa 1994 in San Marcos and featuring seven tracks of squelchy synthesizer and drum programming. Before the end of the year, two more releases were announced: Falling Too Slow and In Pursuit of the Scarlet Woman.