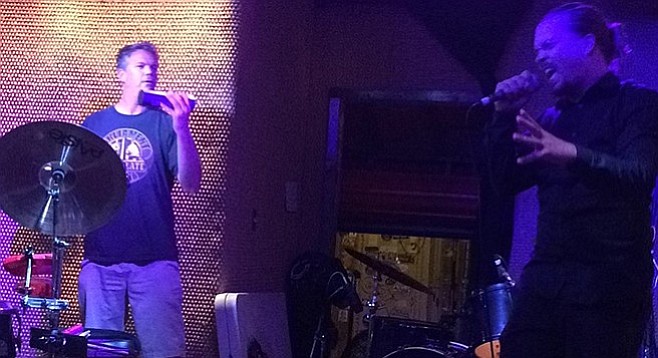 Based in Ocean Beach, electronic reggae band Trans_Conduit is fronted by Osprey Recording record label owner (and U.S. military veteran) Kevin Mankins, alongside Ed Fletcher (Cubensis, Electric Waste Band, the Naked Funk Project). “The band was formed in 2014 and it has always been a duo,” says Mankins, “however we collaborate with different musicians on a regular basis.” Among those guest players are Harold Todd (Lenny Kravitz), Lige Curry (Parliament Funkadelic), OG Ocon (Slightly Stoopid), Anders Pellmark (One Drop), and more.

"In the Latin translation, Trans Conduit means through the natural passage," says Mankins, "and it is across this natural passage of music that our sound lies. Spiritually heavy lyrics of parables that only living where the ocean meets the sand could teach us lend to the group's sound as regional, yet transcending into world music through heavily interwoven percussion and reggae dub step rhythms."

In concert, the band showcase audiovisual trends. "Using projection in conjunction with live audio performance, the live shows always entail lots of dancing and an authentic video composition laced in symbology and synced with improvised choreography on stage."

Mankins' lyrics often concern his experience in the service, his passion for the truth, and his love for this country, especially in tracks like "Black Line," which includes Lt. Col Oliver North’s voice from his Iran-Contra hearings congressional testimony in 1987. The song features Mankins' lifelong friend Mathew Seaton (guitar, vocals), Christofer Welter aka “C-Money” (synths), and drummer Brian Dall (Hailey Montgomery Band).