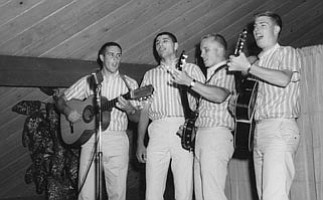 Influences: Peter Paul & Mary, the Kingston Trio, the Beach Boys, the Lettermen, the Four Seasons, the Journeymen, the Mamas and Papas

The Town Criers played folk rock in the 1960s, featuring members who were students at SDSU at the time (not to be confused with the local 1980s county rock band Town Criers). Though they were signed to Fred Astaire's record label AVA, none of their demos evolved into an album release.

Members regrouped in the early 1990s to record a full album called Journey.

Singer/guitarist Stephen Isaacson (who spearheaded the 1990s reunion album) had studied guitar with Frank Zappa, while drummer/singer James Marino had been in the late '50s group the Strangers, whose sole hit was "Caterpillar Crawl" (he later managed local crooner Frankie Laine). Bassist David Jackson later co-wrote Three Dog Night's "Joy to the World," as well as writing Ringo Starr's "No No Song."

Bandleader Ken Mansfield went on to become the U.S. manager for Apple Records and the Beatles' personal liaison for England and the U.S., as well as authoring the book The Beatles, The Bible and Bodega Bay. He did not take part in the 1990s reunion.