Nu-jazz and hip-spoken-word by which to funk, bop, and rock 'til ya drop.

"I was born in San Francisco, with strong family ties to the Bronx and Brooklyn, New York," says singer/spoken word artist Tony Adamo. A former radio announcer at KPLS radio Santa Rosa, he started his music career in rock and jazz bands. "Up until my time in the U.S. Navy, I never really thought about being a spoken word artist," he says

During a recording session at a studio in Half Moon Bay, CA, "The producer, who was playing with Cold Blood at the time, arranged for Mic Gillette and Skip Mesquite, Tower of Power original members, to record with me. We became fast friends and he later introduced me to Stephen 'Doc' Kupka, co-founder of Tower of Power and owner of Strokeland Records."

"Over the next few years, Doc, Mic, Skip, and Tom Politzer recorded on my early CDs, with Mic Gillette
writing horn arrangements." With producer/guitarist Jerry Stucker, Adamo recorded his own arrangements of songs by Tower of Power, including “Soul Vaccination,” “What Is Hip,” and “This Time It’s Real.”

His 2013 full-length Miles of Blu (Random Act Records) was produced by his drummer on “Soul Vaccination,” Mike Clark (Herbie Hancock and the Headhunters). "My producer at the time called in Mike, who had recorded on many of my previous songs, to do 'Soul Vaccination.; The day before, I had laid down a vocal spoken word track and was very hip to the fact that Mike Clark could bring out the
groove that I needed to my lyrics."

"Mike laid down a couple of screamin’ drum tracks that he felt were some of his best ever. My producer was not satisfied with what Clark was doing and asked him to do many other takes. After that session, I realized Mike was the producer I needed for my vocal hip-hop spoken word."

His album Tony Adamo & the New York Crew was released in 2015.

Tony Adamo has signed a record deal with Random Act Records (RAR). Some of the outstanding artists Adamo will be joining are: Mike Clark, of Herbie Hancock and the Headhunters, Michael Wolff, former band leader for the Arsenio Hall show, Larry Coryell named by Musician Magazine as "one of the 100 greatest guitarists alive today, " Kenny Drew, Jr., as Jazziz Magazine says has a "brilliant distinctive style, " Carmen Intorre, Jr., Downbeat Magazine rates his new Cd at 31/2stars.

A recent review of one of Adamo's new songs from his upcoming release, MILES OF BLU on RAR states: "Adamo reaches into the pre-rap turf of Gil Scott-Heron here with this seductive too-short flash memoir about how he discovered jazz and its legendary envelope pushers – Dizzy Gillespie, Charles Mingus, Thelonious Monk, John Coltrane, and Miles Davis. There's energy and honor and wonder in Adamo's words, especially in the fluid alliterative syncopated way the words reflect the inspiration that jazz gave him as an artist, as a human being." Devon Jackson, Village Voice Rolling Stone and Details

Legendary drummer, Mike Clark is the producer on Tony Adamo's hi-voltage vocals and Nu-Jazz Funk/Hipspokenword dialogue on MILES OF BLU Cd. So, can you dig it? Funk, bop, rock 'til ya drop! Random Act Record artists are at the top. 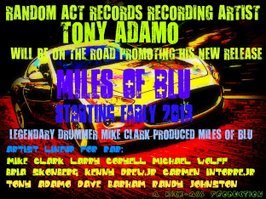