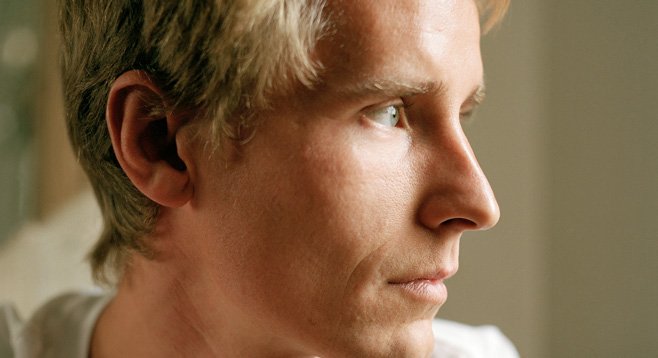 Singer/songwriter Tom Brosseau doesn't mind people calling his music old-timey. After all, he learned to play at the feet of his father and grandfather, who were in a pre-rock band together called Buck and the Buccaneers (and whose album collections were, to say the least, vintage).

"I am an old soul, and so I think that comes out in my voice," says Brosseau. "My favorite songwriters are George and Ira [Gershwin] and also Cole Porter and Jerome Kern. I don't really play the guitar very well, but I use it as a guide, and so sometimes it's more like vaudeville."

The Grand Forks, North Dakota, native moved to San Diego in 2001 and quickly became one half of the American Folk Singers, alongside Gregory Page. "I got taken under his wing; he was the first person I met [in San Diego]. A gal by the name of Genevieve Mantle introduced me to him. She was a fan of his. So many women love Gregory Page. So many men do, too."

The duo's first album was taped in Page's living room over two days, through an old phonograph. Page also ended up working on Brosseau's solo CD, but that was a mere starting point. “The first album Gregory and I made, I remember it taking all my savings, plus a personal loan from my grandmother.... When it came time to having CDs manufactured, I ordered so many that, once stacked inside my apartment, I barely could shake my own foot.

“So, with a backpack [full] of my album, my Gibson J-40 acoustic guitar, a smart haircut, polished shoes, dress clothes, I began in the Mission Hills neighborhood, door upon door, saying hello, my name is Tom Brosseau. I’m from Grand Forks, North Dakota. I play folk music. I’m new in town. I have an album of music for sale. I know you’ll like it.”

For Brosseau's 2005 album, What I Mean to Say Is Goodbye, producer Sam Jones brought in players like Benmont Tench (keyboardist from Tom Petty's band) and Pete Thomas (Elvis Costello's drummer).

In early 2012, Brosseau toured Europe with Damien Jurado and began recording a new full-length with bluegrass artist Sean Watkins (Nickel Creek). He also occasionally tours with John Reilly & Friends, as well as recording a vinyl 7-inch with Reilly that was released by Third Man Records and produced by Jack White.

Later in 2012, Brosseau began splitting his time between Grand Forks and San Diego, eventually resettling away from San Diego, though he frequently returns to play shows. “The album Sean Watkins [Nickel Creek, Fiction Family] and I have been working on is in its final stage,” he announced at the time. “Also in the new year, I’ll be touring some more with the John Reilly & Friends band.”

Brosseau and Watkins did a short west coast tour in June 2013 in support of a Brosseau album produced by Watkins not due out until Autumn, though a limited edition CD was being sold at shows. Brosseau then joined John Reilly & Friends for midwest tour.

“Cradle Your Device,” the first single from his 2013 full-length Grass Punks, was covered in a spotlight for the NPR program All Songs Considered. Recorded and produced by North County bluegrass artist Sean Watkins, who also played guitar, bass, mandolin, and synth pads, the album includes a song with the Google-friendly title “Gregory Page of San Diego.”

A digital EP released by Crossbill Records in late May 2014 is comprised of three tracks: the second Grass Punks single "Today Is A Bright New Day," a Grass Punks studio outtake "Running From Zombies," and a live recording of the gospel standard "When The Saints Go Marching In."

The acoustic crooner spent May and June 2014 on tour with the Milk Carton Kids in Texas, Oklahoma, Colorado, Utah, Idaho, British Columbia, Washington, Oregon, California, and Arizona, and a retrospective compilation album was announced to be in the works, likely to include early early recordings, demos, outtakes, live songs, and radio sessions, all officially unreleased material.

He went to England to record his next album in 2014, after which launched a midwest tour through September with Andru Bemis before returning for Adams Avenue Street Fair on September 28. With a tour of Italy and Spain planned for later that year, he finished the new album recorded and produced in Bristol, England by John Parish (PJ Harvey, Sparklehorse). “It features light but solid accompaniment,” says Brosseau. “A two-piece drum kit, Stratocaster, [and] double bass.”

“Concerning the recording equipment,” he says, “just a single microphone. Nothing more. We were all of us players together on the stage for two afternoons at the Cube theatre in Bristol. Davie Butler on drums, Joe Carvell on double bass, me, Ben Reynolds on electric guitar, and Parish sometimes on organ. The challenge was to figure out how close each man needed to be in relation to the microphone for a suitable sound, and this had to happen with each song individually. If the drums were coming across too loudly, the drummer would have to move his kit a plank or two of the stage back from the mic. If the bass needed to come up, the bass moved a plank towards the mic. The end product, for better or worse, would truly to be its own thing. There’d be no overdubbing, no raising or lowering the levels of any one instrument. So, the album you now hear is simply the choosing of which take of which songs.”

A video was released for "Roll Along With Me," the lead single from Perfect Abandon, followed by a video for "My Sweetest Friend" shot and directed by Sarah Morton. The lead single's B-side "Dark Garage" was recorded on KCSB Radio in 2004, and another video was released for the tune "My Sweetest Friend," directed by American filmmaker Sarah Morton in Los Angeles. The album was promoted on tour in April 2015 in the UK, Italy, France, Germany, Switzerland, and Belgium, followed by midwest and east coast dates during May and June, UK dates in September, and another east coast tour in October.

A video shot by Andrew Van Baal was released for the track "Take Fountain" in Autumn 2015. Around the same time, he recorded a Daytrotter session featuring two new original compositions, "Fit To Be Tied" and "Fractured and Impatient." A new solo album dropped in 2016, North Dakota Impressions.

"The album title takes its name from the immortal Jimmie Rodgers classic 'Treasures Untold,'" Brosseau told the Reader. "It’s the first live album I’ve released in my musical career, which is exciting for me."

"The album cover was taken by a Spanish photographer, Julian Fallas. Basically, the photo is of me, sitting alone in a dimly lit dressing room. When I saw it I knew right away it would make an intriguing front cover, partly because I don’t think the photo looks like me. I’m always trying to do something new and interesting for my album covers, and the Julian Fallas photo goes against the image of what I think I look like, as though it’s someone else, not me."

He spent April and May 2019 on a UK and European tour, kicking off April 22 in Amsterdam before moving on through Germany, Spain, Portugal, and wrapping up in England. Two new albums were released in 2020. A Lifetime Ago is a curated collection of the more obscure and unreleased songs spanning the years 2002 to 2019, with B-sides, studio outtakes, and live performances. Live in York is a live acoustic album recorded in 2019 and featuring ten original songs: seven from various past releases, and three new tracks that were debuted in concert ("Maybe Tomorrow Night", "Town & Country", "I Found A Horseshoe").