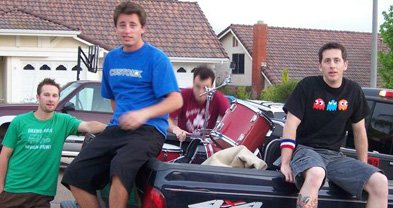 "There are three types of people in this world," says Tigersharks singer/guitarist Travis Hunter. "Sharks, guppies, and shark bait. Sharks are the doers; they act instinctually and without fear. Guppies are the majority; they lack certain qualities necessary to explore deeper waters and are regularly feasted on by sharks. Shark bait tend to be young and female, and even the mightiest shark must realize that, while tempting, shark bait can actually be quite dangerous. We chose to name ourselves after the most stylish shark in the sea: the homey wearing the stripes."

Tigersharks has released one CD, Monsters of the Prehistoric Deep.