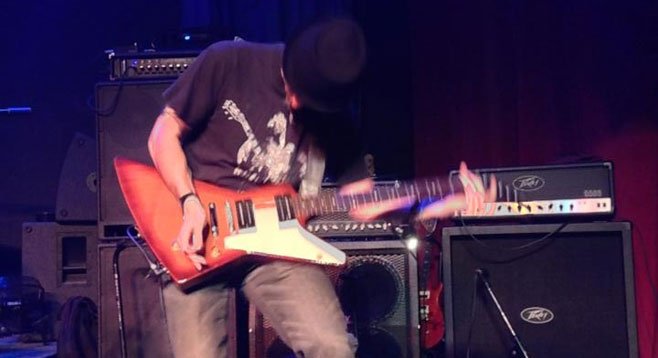 Taylor teamed up with singer Graham Bonnet (Rainbow, Michael Schenker Group) when he found the fellow Brit rocker living nearby, between San Diego and L.A. Together as the Taz Taylor Band, their album Welcome to America was released in 2008 on the UK label Escape Music, along with a concert DVD entitled Live in Prague - Ultimate Bootleg. This complete unedited performance shows them performing 19 songs, including several hits from Graham Bonnet’s career with Rainbow and Michael Schenker Group, as well as tracks from Taylor’s Caffeine Racer solo album.

After the duo worked together on Welcome to America, a Russian tour was booked, but singer Bonnet quit before departure. Taylor replaced him with another Michael Schenker Group vet, Keith Slack.

“The reason for the cancellation,” according to Bonnet on his website, was “we’d recently performed in Europe and the fees I’d negotiated and expected were not honored. I lost money on the tour, as my modest outgoings were far greater than my final paycheck…. I don’t know of anyone who would work for free or, even more bizarrely, pay to work.”

Taylor responded that “There were no fees ever negotiated by Graham for the recent European tour that he refers to. Graham knew and agreed to participate in the tour for whatever the revenues were, based on ticket sales.… At the end of the tour, Graham and a hired keyboardist received every cent of the revenue, including all the money from our own merchandise sales.”

Says Taylor, “The tour was arranged and booked by a German promoter into some of the most popular rock clubs in Germany, Vienna, Budapest and Prague. While hardcore fans of Graham and our Welcome To America album did turn out and made the shows excellent concert events, their numbers were not enough to cover tour costs, flights, nightliner, hotels, taxes, etc...The Russian shows were a different promoter, with a guarantee of payment before departing from the U.S. Hundreds of tickets were pre-sold for these shows and a strong turnout for both shows was expected.”

“Only hours after flights were paid, Graham changed his mind about performing the [Russian] shows, stating his intention to begin work on other projects.”

Of Bonnet's collaborations with Taylor, the Michael Schenker Group, Rainbow, Yngwie Malmsteen, Bob Kulick, Steve Vai, Chris Impellitteri, and Danny Johnson, all but one lasted only one album or less.

In March 2009, the Taz Taylor Band released Straight Up, with Slack on vocals and recorded at local Blitz Studios. Slack recorded his parts from his home in Austin, Texas. Deep Purple keyboardist Don Airey guests on the album. Issued by British label Escape Music, Taylor says Straight Up was never properly promoted. “It came out just when the economy went in the toilet,” he said. “We abandoned our plans to tour Europe to promote it, though we’d been there the previous two years. It was terrible timing, really. It always kind of bothered us that it was an album that had been forgotten.”

In Autumn 2010, U.K Fireworks Magazine #41 interviewed Taylor and reviewed their new album Big Dumb Rock. The band track “Viper” was on the covermount CD of the issue.

Straight Up was re-released on April 27, 2012, rebuilt from the ground up. “We were never 100 percent happy with the mix,” Taylor says. “Looking back, we felt that we really rushed it. So I spent a bit of time in the studio and remixed the album. It sounds 100 percent better. We changed the running order as well and used new artwork.”

Ironically, the idea for the re-release first arose while demoing new material. “We’re working on some songs for possible future release, but we realized that we also had this album of music that never had a chance to be exposed to people here [in the U.S.]. In fact, we only played those songs onstage twice. So, we decided to do some shows playing the entire album all the way through. And if we’re doing that, it makes sense to make the album available again.”

Asked about their worst gig ever, Taylor recalls “It was at the Brown Derby in East Hollywood in June 2005. Things ran way behind schedule on a Thursday night. When it came time to load in, it was already about 1am. I remember thinking if we just left now, I could be home by 3:30 or so. Biggest mistake I made was continuing to load in! By the time we started to play, there were about six people in there, the sound guy was actually reading a book, our keyboardists gear kept crashing, and our drummer's kick pedal came apart. Oh, and we had a box full of CDs stolen!”

Their June 15, 2012 set at the County Fair in Del Mar featured the concert debut of new vocalist Mark Alan Arrington and new keyboardist Josh Weinstein, though Arrington soon departed, leaving the band with no singer. Portions of their March 3, 2013 show at Brick By Brick were filmed in hi-def for a documentary being made about headliner Uli Jon Roth, former guitarist for the Scorpions.

The group’s 2014 album Deja Voodoo is their first full-length minus any vocals. “We recorded at Blitz Recording Studio in Mission Hills. I’ve known Richard Blitz longer than anyone else currently in my life, excluding my wife and my mom...everything was tracked together in just a handful of takes, the only overdubs being the guitar solos and keyboards.”

The album art was created by MSG cover painter Tristan Greatrex, who also created the original MSG logo. “This is the very first Taz Taylor Band album that’s been recorded by a lineup that has actually existed for some time and has been playing shows prior to going into the studio. Every other album was made after the band had reached some kind of crossroads, and we regrouped with a few new guys and started over.”

As of 2014, Taylor had been living in San Diego continuously since 1997, and in Imperial Beach since 2000. "My favorite thing about my specific neighborhood is that it is kind of like old school SoCal. The beach area is busy with people enjoying the ocean and the fresh air, surfing, and riding bikes. Going to the beach in I.B. does not mean what it means in some other neighborhoods. I honestly cannot think of anything negative to say about IB...it isn't even as far away as most people think it is!"

They spent April 2014 on a European tour that culminated at the Roadburn Festival at Tilburg, in the Netherlands, alongside Italian sludge rockers Grime, followed by a British tour running from August through September, during which dates were recorded for an upcoming live album. The filmed their August 30 set in Bristol, England for a series of concert videos, with a clip of them performing “Deja Voodoo” released first.

In 2017, Cherry Red Records in England issued an anthology collecting work with one-time Taz Taylor Band singer Graham Bonnet. The two CD/one DVD box set covers 1968 through 2017, with tracks from Rainbow, Alcatrazz, and others, along with two songs from Taz Taylor's albums.