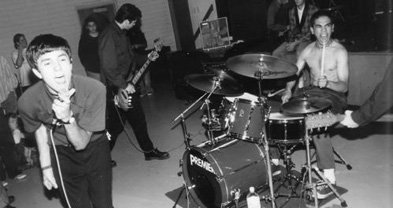 RIYL: The Plot to Blow Up the Eiffel Tower, Refused, Orchid, Jerome's Dream, Antioch Arrow, Drive Like Jehu, the Locust, Holy Molar, Some Girls, the Crimson Curse, the Album Leaf

Swing Kids were a 1990s hardcore/screamo band. The original Swing Kids included the late Eric Allen (of Unbroken), drummer Jose Palafox (of Struggle), frontman Justin Pearson, and bassist Michelle Maskovich, who was replaced by John Brady before the band ever played a live gig. Pearson would release their recordings on his own Three One G record label.

Original bassist Michelle Maskovich was replaced by John Brady. "I joined the band not long after Michelle called it quits, and we released a 7" record, played our very first show in Santa Barbara, did a bit of touring up the West Coast, headed out to Detroit for Michigan Fest in March of 1995, and went over to Europe in 1996 on a tour that was, in many ways, quite disastrous, before calling it quits."

Their music was characterized by Justin Pearson's spoken/screamed vocals and their melodic/chaotic rhythms & song structures. Swing Kids carried the San Diego "art hardcore" movement past the initial wave of Gravity Records bands through the late 1990s.

Swing Kids are credited with the unintentional creation of so-called Spock Rock, mainly due to fans emulating Pearson's fashion sense and hairstyle, which looked similar to that worn by Mr. Spock on the original Star Trek.

Justin Pearson (Struggle, the Locust) ended up forming a new record label, Three One G, to release music by both Swing Kids and Eric Allen's band Unbroken. “Unbroken was Struggle’s sister band, and was easily one of my favorite bands at the time,” says Pearson. “Eric suggested I release two new tracks that they were going to record while on tour on the East Coast. He said I could use the material for the first release on a label that I should start, and jokingly called it JP Records.”

"Officially," says Brady, "Swing Kids played our last shows at the end of 1997. Jimmy LaValle, who had been playing in a couple of other bands with Justin, joined the band toward the end on second guitar. Not long after the band broke up, Eric passed away."

Pearson later played with the Locust, Holy Molar, Some Girls, Crimson Curse, and All Leather (which includes replacement Swing Kid Nathan Joyner). John Brady (currently living in Chicago) went on to play with Spanakorzo and Sweep the Leg Johnny, while Jose Palafox joined Bread and Circuits.

A couple of reunion shows (sans the late Eric Allen) were staged by Pearson in 2009. In summer 2011, he and several other original members recruited Nathan Joyner (Hot Nerds, All Leather, Some Girls) and toured Europe as Blue Note, playing sets of Swing Kids music.

Original Kid John Brady explains how the tour and new name happened. “Marco Walzel, at Avocado booking in Munich, who incidentally booked us for some German shows in 1996, asked if we would come over to do a tour in honor of the 15th anniversary of his booking agency. We were the first band he ever booked, and he wanted us to help celebrate by reforming...but, this time, we didn’t quite think it was fair to play as Swing Kids.”

Thus, Blue Note was named after a Swing Kids song.