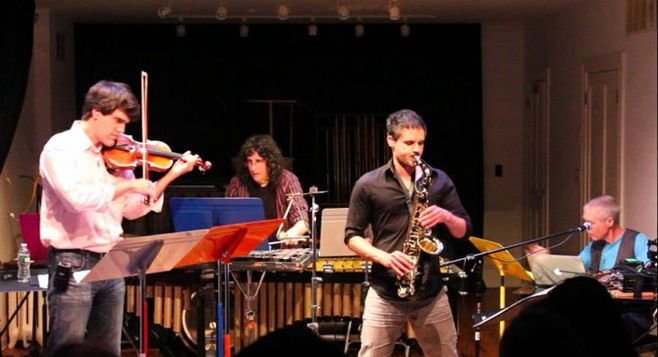 Since 2001, composer Joseph Waters has been a professor of music and director of electro-acoustic and media composition at San Diego State University. The 50-something composer/musician has degrees from the University of Minnesota, the University of Oregon, and Yale.

Swarmius mixes European classical music with more tribal-sounding African tones. They performed for the first time in early 2008 at the Neurosciences Institute.

Waters founded the NWEAMO (New West Electro-Acoustic Music Organization), which says it promotes “connections between the composers, performers, and lovers of avant-garde classical music and the DJs, MCs, guitar-gods, troubadours, and gourmets of experimental popular music.”

At SDSU, Waters has instituted a new major, Electro-Acoustic Composition, with courses geared toward creative experiments within so-called popular genres such as rock, metal, hip-hop, and electronica.