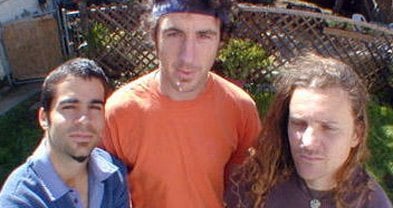 Formed in 1995, Superunloader holds a San Diego Music Award for Best Rock Album. "I remember when we used to sit in our bedrooms and play records," says Chad Farran.

"It was the '70s, and listening involved sitting in front of the stereo and flipping the record when a side was over, as well as thumbing through your collection and deciding on what to listen to next. It was back when bands like Led Zeppelin, Rush, Hendrix, Deep Purple, and King Crimson took us on epic musical journeys, and when an appreciation of their craft required interaction. This is exactly where Superunloader takes me -- a place where the emphasis is on jam and lyric, not on danceabilty or catchy-ness."

Their album Live and Unfashionable featured one side recorded in concert at Winstons and the other taped live in the studio, while Live and Small archived an acoustic set at Lestat’s.

The band took much of 2010 off, though members did turn up playing with Wise Monkey Orchestra. As of 2011, the group included Jimmy Lewis on vocals and guitar, Chad Farran on drums, and Chris McGreal on bass. They announced a new album was in the works from the three core founding members.

Twice in Half debuted in summer 2017, their first full studio album in nearly 20 years. According to Farran, “We started to slow down as other things in life took priority. Chris [McGreal, bassist] had always wanted to live in the Central California coast and, when the opportunity came, he moved into a yurt in Big Sur. He still comes to San Diego every couple months, for work and the occasional gig.”

McGreal co-founded a tech startup and played in the Big Sur band Songs Hotbox Harry Taught Us, while Farran worked in web design and studio recording and gigged with Puente. At the time, singer/guitarist Jimmy Lewis was the band’s only full-time musician, with steady solo gigs, his group Pushers, and an acoustic duo called T.V.’s Watson and Lewis.