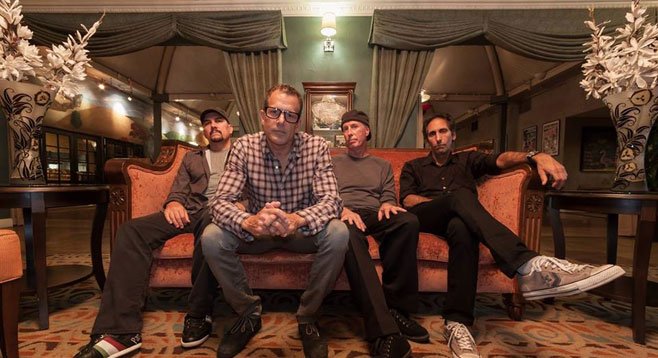 After making their live debut in January 2011 at 710 Beach Club in PB, they released their debut We Are Stars in October, recorded with Brian Karscig (Nervous Wreckords, Louis XIV) at White Horse Recording Studio. Karscig also sang backup on the track “Girl Problem.”

“The album is about girls and stars, Hollywood and outer space, along with all the dark and sexy craziness of being in the Hollywood scene,” says Fernandez. The band includes singer/guitarist/keyboardist Dave Montalbano (“I was an actor in San Diego and L.A. for years”), guitarist Greg “Bones” Jones (“I used to babysit Jim Belushi’s dog”), and Greg Patus (drums, percussion).

Jones recalls one of his non-music day jobs: “I got fired from the PB Bar and Grill. At sunset, the manager wanted me to take down all the table umbrellas, so I did, even the ones where people were still eating. While I was cranking the umbrellas shut, bugs and stuff were falling into people’s food and drinks.”

Their song “Girl on Girl” was heard in July 2012 on the third episode of season eight of the Showtime TV series Weeds. A full-length called Devil's Lounge was released in July 2013, produced by Erik Groysman and recorded at Flight 19 with Valery Saifudinov.

Drummer Rich Slinkard was replaced in early 2014 with Dennis Key. A video was released for their song “Teenage Love Gone Wrong,” off of their second album Devil's Lounge. It's the directorial debut for Jimmy Ovadia, who created album art for Matisyahu's album Akeda.

The band's next full-length La La La, engineered by Steve Albini (Nirvana, the Pixies, the Breeders) at Electrical Audio in Chicago, dropped November 20, 2015, preceded by the first single "Barney's Girl."