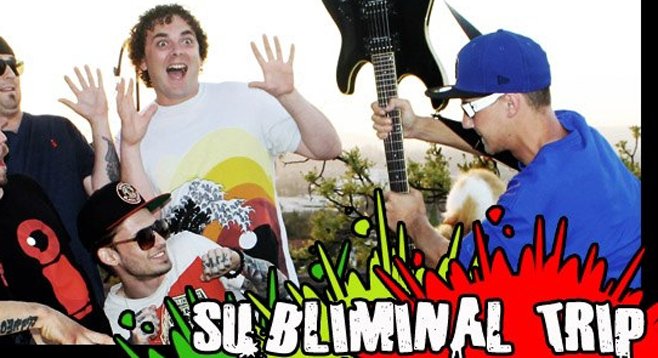 Reggae rock band Subliminal Trip was founded by Jason Becker (J-bird), who later teamed up with Joel Brust to perform as an acoustic duo for around six months. The duo recruited Ocean Beach musicians Garrison Cyr (bass) and Colin Holz (drums) for a full band lineup.

A six song demo was released in March 2010, followed by their full-length debut Be Set Free in March 2011. Then, “The entire band was fired by the singer who founded the band,” says Subliminal Trip percussionist Dustin Becker, J-Bird's older brother.

“J-bird had Subliminal Trip when he was 12, and now he’s 23,” says Dustin by way of explaining why J-Bird kept the band name for an otherwise all-new lineup, while longtime guitarist Joel Brust joined fellow ex-Trippers (bassist Garrison Cyr and drummer Colin Holz) to form No Kings. “Arguments had started to arise with Colin and Gary, who were found on Craigslist to start with, about them wanting to manage the band and book gigs. Which was not okay with J-Bird.”

“First off, J-Bird never fired anyone, we quit,” counters guitarist Joel Brust. “I want that to be crystal clear, we were fed up with his lack of talent [and] with his brother’s inability to manage a band. We quit, we were never fired. I have several emails on my computer from Jason Becker begging us to come back…after we quit Subliminal Trip, we found our friend Matt Cook and got him in as our new vocalist.”

No Kings were unable to keep Subliminal Trip’s drummer, though. “About a year into the new project, it became obvious that due to his personal lifestyle choices, Colin Holz could no longer play with us...there were a lot of contributing factors but let’s just leave it at artistic differences.” Holz was replaced in No Kings with Rafael Scatolin.

Subliminal Trip's summer 2013 single “It’s a New Day” features guest singer Lady Cellie. Around the time of its release, Sam Hartjen was replaced by Rex Costales. “[He] has alot going on with Reason to Rebel and is going on a national tour with Finch, which doesn't make time for Subliminal Trip,” said Dustin. That wasn't the only shakeup among the new lineup. “Marc Losacco didn't fit how we were hoping but still is a good friend of all of ours.”