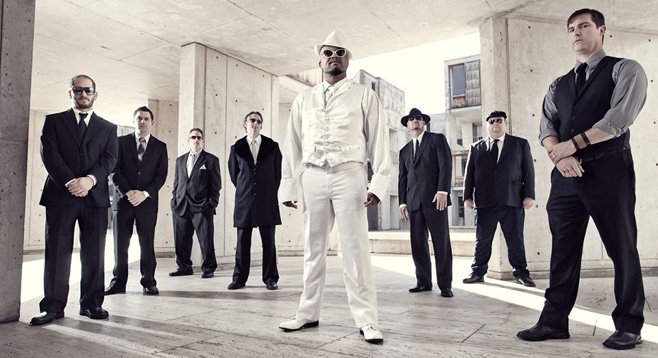 R&B/funk/soul combo the Styletones were long fronted by singer Steve Harris (a 1990 graduate of Hoover High who also fronts Stevie & the Hi-Staxx) and producer-keyboard player Ben Moore. “[We had] drums, bass, guitar, singer, B3, three horns, some funk 45s, some rare soul, [and] some original stuff,” says Moore. “This hard soul sensation will provide the soundtrack for the best night of your life, without regard to curfew, sex laws, or the repercussions for your guilty pleasures.”

The band has included Jake Najor (formerly of Blackout Party and the Tighten-Ups) and ex-members of (or touring musicians from) Conglomerate, Pocket, Karl Denson, the Wise Monkey Orchestra, Big Daddy Kane, Breakestra, and Bad Credit.

Summer 2009 found them playing a weekly Monday residency at Bar Pink, an arrangement that ceased at the end of 2010. “We want to kind of lessen our exposure a little bit,” keyboardist Moore told the Reader at the time. “A couple of venues in town that are more showcase-oriented types of places have communicated to me in the past that we play too often and that it makes it hard to get people to come out to [other] shows if you’re playing every single week in the same place.”

Club residencies, says Moore, are a proven means to build a band and gain a following. And, it’s been a steady paycheck for what, by club standards, is a very large and potentially expensive band to book. “There’s not another eight-piece soul band out there as far as I know,” says Moore.

Steve Harris shares the same name as the bass player for Iron Maiden. “So I had an acoustic show at San Francisco State University. I walk out on stage and the first two rows are filled with metal heads who look at me like I killed somebody. They get up and walk out. At least twelve of them, they were bummed for sure.”

In early 2013, they were heard on TV during a 60-second Super Bowl Sunday commercial in a Got Milk? ad, performing the Sam & Dave classic “Hold On! I’m A-Comin’” while the Rock, aka Dwayne Johnson, battles alien invaders and other foes. Sam & Dave singer Sam Moore was reportedly unhappy with the cover version, according to his manager and wife, Joyce Moore.

“When the song first aired, people thought it was Sam,” says Harris. “He started doing press about it. He wrote letters to the band, to the ad agency, and to the milk people, at first saying I was doing identity theft. Then he turned around and said it was a horrible version and I was ruining his image. But it’s been a year and it doesn’t look like he’s going to sue anybody. But it did kind of squash the momentum of the song. But it’s a song the Styletones don’t play, anyway. We do the more obscure, raw soul songs. We don’t do the hits.”

As of 2016, Moore was busy producing and the Styletones appeared to be defunct.