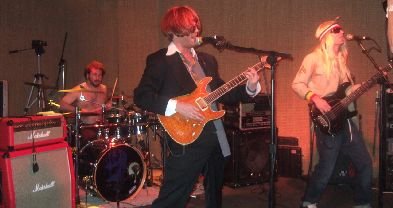 Sound description: Aggressive rock with heavy reggae influences -- think Bob Marley and the Wailers, if their guitarist was Dimebag from Pantera. Their sound is a blend of metalesque screaming guitar riffs, driving, upbeat rhythms, and subsonic bass lines.

When 19-year-old snowboarder Hannah Teter won the gold at the 2006 Winter Olympics, the song playing during her halfpipe run -- “Communicate” -- was by locals Strive Roots, whose singer/guitarist Eli Lieberman was dating her. “We got 150,000 hits on the website within a few hours of the Olympics and could have sold a ton of downloads,” he says, “but the record just wasn’t ready in time. We’re not business guys, we’re musicians, and we just didn’t have the money to pull it off, so the record wasn’t pressed until a few weeks later.”

He says iTunes managed to post the track for sale online, but not until two weeks after the Olympic exposure. “It’s a kick in the ass that we didn’t have anything on the website, not even credit cards, when all those people were looking for [the song].”

Lieberman says the band’s name was originally just Strive, but “A couple of Christian rock bands took the name after we did. We’re self-managed and self-produced so, instead of making a big legal deal about it, we just changed our name to Strive Roots.”