Oasis, The Strokes, The Arctic Monkeys, Kings of Leon, Twin Peaks, Cage the Elephant, the Black Keys, Spoon, David Bowie, Portugal. The Man, The Frights, Catfish and the Bottlemen

Based in Point Loma, indie rock band Stray Monroe was founded by Blake Imperl and Colin Croft, both of the Hype, soon joined by their Hype bandmate Adam Hakes. The trio began work on an EP in February 2016 with producer/audio engineer Lars Orange, with bassist Brett Kelly joining during this period.

After their May 2016 concert debut, they released a single that November, "Broken Records," promoted with a music video directed by Timmy Ornelas. "The video takes you through the eyes of a girl who struggles with social anxiety," according to the band. "We hope to bring awareness to this issue that many people in society face." A followup single and music video was released in March 2017, “Take
It Fake It,” from their EP The Stray Monroe Show.

After signing with RockToc Management in summer 2017, they recorded their album Forever After, preceded by singles for the title track and "Happy Accidents." In September 2017, Adam Hakes left the band, around the same time that a video for “Happy Accidents” was released.

The band's Momentary Vertigo EP was released in March 2018, along with videos for "Hold the Line" and "Seaside."

Check out our other single, "Take It Fake It", here! 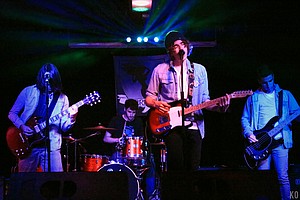