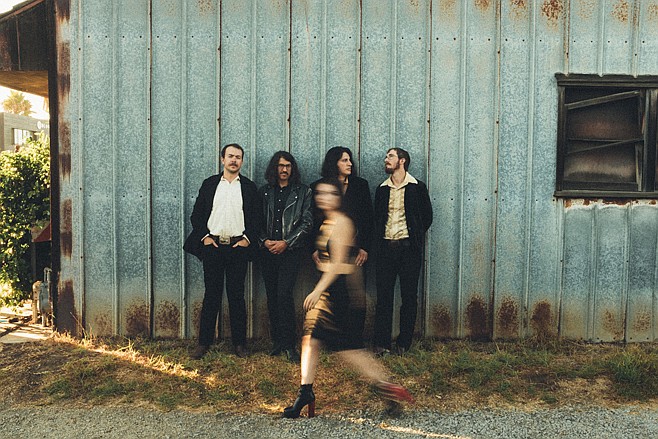 “We're brought together by a love of strong melodies and harmonies, '60s pop and psychedelic, as well as the shimmery arrangements of folk rock and the intensity of power pop and post-punk,” according to dream/psych/pop/art rockers Strawberry Moons.

A short time after the Burning of Rome home three 2014 San Diego Music Awards -- for Best Live Band, Best Alternative Album (Year of the Ox), and Song of the Year (“God of Small Things”) -- that North County band broke up and frontman Adam Traub moved to Chicago.

“I wanted to do something more melodic with a female vocalist,” Lerner told the Reader. The Lerner/Jacobs collaboration led to the release of a self-titled four-song EP recorded by James Page at Emerald Age Recording in Vista.

Taking to the road, Lerner reports that things didn't always go smoothly. Asked about their worst gig, "It was in Bullhead City, AZ, right on the Colorado river across from Laughlin. We were on the last night of a four-date tour in Arizona, heading to LA the next day. We’d prefer not to say the name of the club, but we got there and absolutely nothing was set up. The PA was put away as if it was rarely used, there was no soundman, and the staff had no idea how to run the equipment. Needed cables and accessories were missing, and we had to figure out how to get their system working while still setting up our own gear. And the locals were anything but sympathetic."

"Our bassist and drummer overheard drunk river bros talking about the 'San Diego f-gg-ts” who couldn’t get their shit together...we didn’t know if we were going to get bottles thrown at the stage or if we’d get jumped at some point or what. We finally managed to get the PA working and play our set, and as frustrating and stressful as it was, the bartender was a sweet woman who got us drunk, and the owner, although sadly absent, was super cool. He got us a room at one of the nicer casinos in Laughlin and paid us well for our trouble. So maybe it wasn’t the worst gig, just the strangest!"

A single released in April 2019, “Nicole’s Song,” preceded a self-titled full-length planned for later that year, recorded and produced by Ben Moore at local Singing Serpent Studios. "We’re currently working closely with our artist/designer on the themes for the album release and the individual single releases," Aimee Jacobs told the Reader. "A hand-drawn image will be associated with each song - a poppy for 'Nicole’s Song,' a hill for 'Cigarette Hills,' a snake emerging from a basket for 'Snake Charm' - along with photos by Jay Reilly from a recent session, and our original logos."

"Since the recording, we have parted ways with our original and amazing lead guitarist John Falk, and have brought Hector Duenas into the fold. He has incredible taste and tone, and has picked up all the material very quickly. We were definitely concerned we’d be majorly set back, but happy to say it’s all systems go."