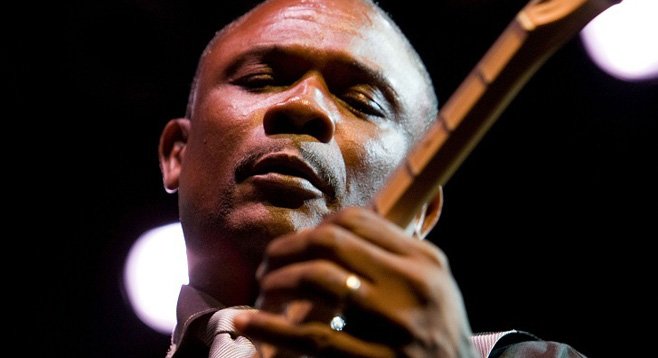 The Stoney B. Blues Band is fronted by singer/guitarist Michael Stone, aka Stoney B., a transplant from New Orleans by way of Chicago, whose father is Lil' Howling Wolf, aka Jessie Sanders. “My dad was mentored by Howlin’ Wolf, and he introduced me to many blues legends in the Chicago scene,” says Stoney.

“My grandfather made moonshine back in Alabama, and he used to keep the gallon jugs behind his bed. I was 14, visiting from Chicago. As I watched the adults indulge, I decided to try it myself. The first drink took my breath away. I crept around behind his bed three more times before I got sick and threw up. The secret was out.”

He found music to be a much better tonic. “I started at 15. I played the bass until I went in the Army. Then I bought a Fender guitar. I spent four years figuring out what to do with the other two strings.” He formed his first band and has been playing the Blues ever since, including thirteen years spent as a New Orleans street musician, performing with Grandpa Elliot, with whom he often records. His wife passed away in November 1977.

“My roots are from Chicago and the South, and my music is still the blues...in its many interpretations. It’s delivered in a way of feeling. Bluesmen are storytellers, and the music is about life.”

He says his most memorable day happened in Chicago. “Muddy Waters’s funeral. I was the first to arrive at his funeral in Chicago. I went in and viewed his body, and I was in there all by myself. I’ll never forget that day as long as I live.”

Chicago was also the scene of one of his strangest gigs. “I remember playing at the Kingston Mines...I was there with my band playing a hot solo of the blues. I was really into it, and I sometimes play with my eyes closed. While playing , I heard the crowd yelling and screaming. I knew that I was on with my solo because it even sounded good to me. Little did I know that my speaker was on fire! My drummer screamed at me...when I turned around, my speaker was ablaze. I stopped playing as the crowd was still screaming. I've never even heard of anything like that happening to anybody. I unpluged my amp and put my guitar jack into the house PA, and kept on playing! Yes, the club got a little smokey.”

He relocated to San Diego in 2007. “I lost almost everything to Hurricane Katrina. After I got to California, I ran out of money and had to move out of the hotel where I had been staying. I lived under the bridge on F Street and ate food from St. Vincent de Paul.”

The Stoney B. Blues Band debut performance was July 8, 2010, at the South Park Bar and Grill. As of 2011, the band includes Lance Dieckmann (formerly of DA & The Hitmen and Delta Heat), Pat Kelley (Delta Heat), ‘Papa Bob’ Prater, and ‘Dr. Shady’ Tim Coleman.

However, “I had been having a recurring problem with drugs. That’s one of my vices,” Stone says. “So I just left. I was gone from San Diego from November [2012] to May [2013]. I went to New Orleans. When Jazz Fest was over, I came back.”

“I’m happy today to be alive. Most of the people I grew up with are dead. I grew up in the Robert Taylor homes, the ghetto in Chicago. Maybe only 3 out of 15 of my friends are still alive, and my musical friends? They’re dropping like flies. I’m grateful to be alive. And I’m still playing the blues.”

After spending around five months in San Diego, the guitarist, somewhat unexpectedly, relocated back to New Orleans in Autumn 2013.