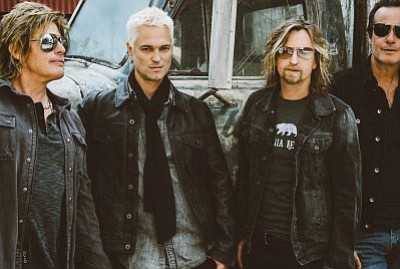 Their "An Evening With" acoustic tour of North America due to begin in Vancouver, BC on February 5 was cancelled due to lead vocalist Jeff Gutt suffering a severely herniated disc. Their upcoming acoustic album due on February 10, Perdida, is new singer Jeff Gutt's second studio release with the band following a 2018 self-titled record. A new single "Fare Thee Well" was recorded at drummer Eric Kretz's Bomb Shelter Studios, with a video directed by P.R. Brown (My Chemical Romance, John Mayer, Prince), and another new single is streaming online, "Three Wishes." Once Gutt recovers, they still plan a tour of Australia with Live and Bush, and summer tour with Nickelback.

Stone Temple Pilots came together when Scott Weiland met New Jersey-born bass player Robert DeLeo at a 1986 Black Flag concert in Long Beach. The two Point Loma residents found they were dating the same woman but, rather than fight, they decided to form a band and ended up living together in the woman’s San Diego apartment after she moved to Texas. DeLeo’s brother Dean joined on guitar and Eric Kretz (who was born in Santa Cruz — as was Weiland — but was also living in San Diego at the time) became their drummer.

In their San Diego days (from 1987 through 1990, when they moved to Los Angeles), they called themselves Mighty Joe Young. Bandmembers have claimed the STP motor oil logo inspired them to change their name to Stone Temple Pilots, because they could get STP stickers for free at gas stations and use them as promotional giveaways (rumors that the STP motor company filed a lawsuit over the band’s initials appear to be unfounded). After being signed to Atlantic Records in 1992, their first album, Core, brought fame, fortune and, in the case of drummer Eric Kretz, an acrimonious and expensive divorce.

In a 1994 Rolling Stone poll, STP was voted Worst New Band by critics, and Best New Band by readers. The same year, STP’s song “Plush” won a “Best Hard Rock Performance” Grammy. All five of the band’s studio albums have earned either gold or platinum certification. Weiland’s 1996 arrest for possession of heroin and cocaine derailed the band for awhile. During a band hiatus from 1997 to 1999, Weiland released a solo album and the others formed a temporary band, Talk Show.

The band split in 2003, with Dean and Robert DeLeo forming Army of Anyone with Filter singer Richard Patrick and drummer Ray Luzier (who went on to join Korn). STP drummer Eric Kretz founded his own Bomb Shelter studio and worked as music supervisor of the Henry Rollins Show.

VR canceled a planned Australia tour as well. Shortly after resuming their tour schedule, Weiland announced onstage that Velvet Revolver was through. The band rebutted that they would stay together, with a new lead singer.

After coming across the DeLeo brothers at a 2007 beach party, Weiland began talking to them about an STP reunion. The result was a 2008 reunion tour and a 2010 self-titled album produced with help from Don Was. The album came out on Atlantic Records, despite the fact that the label had sued over breach-of-contract issues, when the band first announced its plans to reunite and record withOUT Atlantic. Released in May, 2010, it debuted at number two on the Billboard album charts.

Weiland released a holiday single in 2009, “Have Yourself a Merry Little Christmas.” Later in 2010, he announced a solo Christmas album is in the works.

Their first tour of Australia and New Zealand kicked off in March 2011 at Challenge Stadium in Perth, and then the DeLeo brothers joined Steven Tyler to song “Dream On” on the season finale of American Idol.

In early 2012, two unreleased 2010 videos for their song “Cinnamon” surfaced online, shot for the third single from their latest full-length, one directed by Aggressive (Alex Topaller and Dan Shapiro) and the other by Dennis Roberts. Neither clip was ever officially released. Their first concert DVD, Alive in the Windy City, dropped June 26, 2012, featuring a March 2010 show filmed in Chicago.

As for their next album, singer Scott Weiland told Billboard “They usually start before me, just getting some rough ideas together and then putting rough ideas down on ProTools with no lyrics and no melody.”

They angered fans in Abbotsford, British Columbia Canada on September 17, 2012, after they appeared 105 minutes late for a show, delivered a short set, and then cancelled the following night’s performance with no explanation.

In February 2013, “Stone Temple Pilots have announced they have officially terminated Scott Weiland,” according to a statement issued from the band’s management.

Weiland issued this statement in response: “I learned of my supposed 'termination' from Stone Temple Pilots this morning by reading about it in the press. Not sure how I can be 'terminated' from a band that I founded, fronted, and co-wrote many of its biggest hits, but that's something for the lawyers to figure out...In the meantime, I'm looking forward to seeing all of my fans on my solo tour which starts this Friday.”

Linkin Park's Chester Bennington's May 2013 concert performances with STP, replacing fired singer Scott Weiland, lead to further collaborations (he previously performed with the STP in 2001 for the single “Wonderful”). A new song debuted at the KROQ Weenie Roast, “Out of Time,” was made available as a free download at Radio.com.

With Bennington, they announced plans to play Japan's Loud Park Festival on October 19, 2013, marking STP's first trip to Japan since 1993. The festival bill also included King Diamond, Trivium, Last in Line, and more. Before departing, they began recording a new EP and embarked on a tour with Filter in September.

The EP with new singer Chester Bennington, High Rise, was released on their Play Pen label (distributed through ADA) on October 8, 2013, featuring their debut singles “Out of Time” and “Black Heart” and preceded by an appearance on nationally syndicated radio show Rockline on October 7. Their concert at Hard Rock Live in Biloxi, MS on November 1 was streamed free online.

The band was scheduled to headline opening night of the Emirates Airline Dubai Jazz Festival on February 13, 2014, filling out a bill that also included the Wanted, Colbie Caillat, Jamie Cullum, and Olly Murs. However, they cancelled all upcoming shows, announcing “The recording of the new album has now gone beyond schedule and sadly the availability of the recording studio, engineers and the producer or lack thereof dictates that the band have had to cancel their upcoming engagements.”

A U.S. tour with Linkin Park singer Chester Bennington kicked off April 8, 2015 in Seattle, taking them through California, Colorado, Texas, Oklahoma, Illinois, Maryland, New Jersey, New York, and Massachusetts, before wrapping up in Philadelphia on April 30.

STP parted ways with Bennington in late 2015, with the singer going back to full-time duty with Linkin Park. They reunited with Bennington on March 26, 2016, at the Norris Theater and Pavilion for a one-off performance at From Bach To Rock, a charity concert to benefit public schools in Rancho Palos Verdes.

Former singer Chester Bennington passed away in summer 2017 at the age of 41, from a reported suicide.

In autumn 2017, they streamed a demo of "Only Dying," a previously unreleased song that appeared on the September 29 release of multiple 25th anniversary deluxe editions of their debut album, Core.

On November 14, 2017, they debuted their new singer Jeff Gutt, known from seasons two and three of TV's X Factor (where he earned acclaim for his cover of Leonard Cohen's "Hallelujah"), at the Troubadour in West Hollywood, during a show for SiriusXM listeners. Gutt never submitted an audition tape. He was discovered by a bassist Robert DeLeo after playing a Detroit concert with the all-star pickup band Hollywood Vampires. The next two new singles were from their forthcoming self-titled album, "Meadow" and "Roll Me Under," both featuring Gutt.

A 15-date Canadian tour with Seether began in Penticton, BC on October 23, 2018, heading east across the country before wrapping up in Moncton, NB on November 16.

Live 2018 was released on red vinyl as part of the Record Store Day 2018 Black Friday event on November 23, limited to 5000 copies and featuring 3D cover artwork and free 3D glasses.

They took new singer Jeff Gutt (of TV's X Factor) to Glasgow and London to play the O2 Academy Glasgow on June 12, 2019, and the O2 Forum in Kentish Town, London the following day. Around the same time, the 25th anniversary of their sophomore studio album Purple was celebrated with an expanded reissue made available both digitally and as a two CD deluxe edition.

The 3CD/1LP "Purple: Super Deluxe Edition" includes a newly remastered version of the original studio album on both CD and vinyl, plus unreleased versions of album tracks and rarities, along with an unreleased full concert recording from 1994.

The 25th anniversary reissue explores the making of the album with a mix of unreleased music that includes demos ("Unglued" and "Army Ants") and early versions of album tracks ("Meat Plow" and Interstate Love Song"), plus acoustic recordings ("Big Empty"). The collection also features three unreleased live performances from the 1994 KROQ Acoustic Christmas show, including a version of "Christmastime Is Here" from A Charlie Brown Christmas. Perhaps the biggest surprise of the new collection, however, is STP's previously unreleased demo of "She Knows Me Too Well," a song the Beach Boys originally recorded in 1965.

The expanded project closes with a previously unreleased recording of the band's August 23, 1994 concert in New Haven, Connecticut. The 17-song performance captures the band in top form with both electric and acoustic sets, featuring 10 songs from Purple along with hits from Core ("Plush" and "Sex Type Thing") and covers (David Bowie's "Andy Warhol" and Woody Guthrie's "Gypsy Davy").

Haven't seen STP in a long long time. The last tme we saw Wieland was with Velvet Revolver so that's what probably 4 yrs ago?

Dear Scott, Are you aware of how good you have it? Are you aware of how bad you do it? Just asking. I'm a recovering addict who would give his left arm to have your opportunities placed in front of me. You've flushed down the toilet every morning, more talent than most people will ever know or posses. Your band mates are some of the more skilled songwriters, arrangers, and musicians the industry has ever known! Don't you remember the magic? I remember the rush of the screaming, teeming, bubbling ocean of fans. That my friend, is better than any drug. Yes, I've played also and it sickens me to watch your wasted talent. My hands are slowly betraying me and you my friend are betraying yourself. Okay, lets say that the relationship between you and the STP boys ran its course. What happened to the Velvet Revolver project? I mean can't you see it? I'm a fan yes! I'm also a concerned human being that would hate to have to read of your untimely death due to your stupidity. Wake up man!