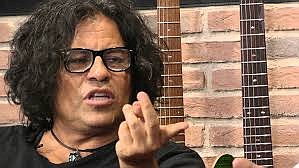 Self-taught guitarist Stevie Salas is a Mescalero Apache Indian who was raised in San Diego. He went to high school in Oceanside where, at the age of fifteen, he picked up his first guitar and ended up choosing a music career over joining the Coast Guard.

He got an early career boost after being spotted by George Clinton of Parliment Funkadelic. As a result, just two years out of high school, Salas was already touring with Rod Stewart, and Mick Jagger tapped him for a 2001 tour. After his girlfriend committed suicide, Salas was blamed by some tabloid reports, causing him to essentially shun most media coverage for the next few years.

Salas kept his hand in music, as well as producing bands like Australia's Yothu Yindi, a group with Aboriginal and balanda (non-Aboriginal) members. He also branched into film production, including the 2017 documentary Rumble: The Indians Who Rocked the World, chronicling artists such as Link Wray, Robbie Robertson, Randy Castillo, and Jimi Hendrix, whose paternal grandmother was one-quarter Cherokee. He followed that up with a film about the Standing Rock conflict involving Native Americans attempting to prevent oil pipeline construction on Indian land.

In 2018, he decided to forgo touring in favor of working on more film scripts, though he did go to Australia at the end of the year to perform and record again with Yothu Yindi. Around the same time, he formed new band featuring frequent Rolling Stones collaborator Bernard Fowler, bassist Doug Wimbish (Living Colour), and drummer Brian Tichy (Ozzy Osbourne, Billy Idol).

In early 2019, Salas was recruited to play the 2019 David Bowie Alumni Tour, alongside Bowie's longtime keyboardist Mike Garson and several other Bowie vets.