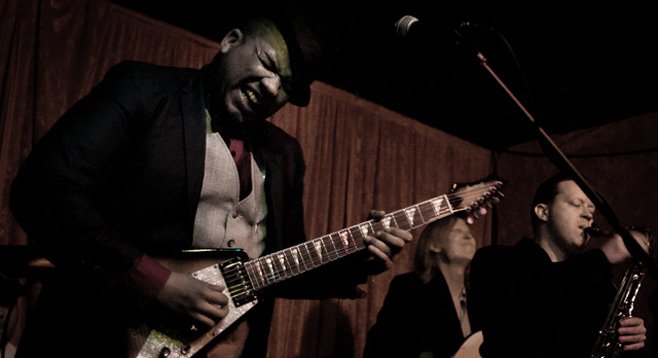 Fronted by 1990 Hoover High grad Steve Harris, Stevie & the Hi-Staxx plays bluesy soul, funk, R&B, and rock. Harris’s SD music history includes a 1992 band that was the predecessor of the Greyboy Allstars. He then left for L.A. to do a development deal with then-new label Modern Records, owned by Stevie Nicks and distributed by Atlantic. Harris says Modern was paying him $2000 a month and covering recording expenses and pay for his backup band. He recorded some 24 tracks at high-end L.A. recording studios.

“Modern Records’ first two releases were by Foghat and Stevie Nicks. Both of those albums crashed and burned. I was supposed to be the third album, but when they bombed, the guy at Modern couldn’t push my album through.”

San Diego’s Cargo label released two CDs by Harris’s soul-rock project Conglomerate before the whole band moved to Oakland. Harris became a Muslim and fronted an Afrocentric hip-hop collective called Remarkable Current, which toured the country. “We would wear our kufis and have beards and pray in the airport at 4 in the morning waiting for our flight. This was right after 9/11. We would freak people out. But for some reason we never got called into secondary.”

After moving to Florida for two years, Harris returned to San Diego in 2007 and ended up in the Styletones and founding the Hi-Staxx. The band entered White Horse recording studio at 10am on Tuesday, March 29, 2011 -- by 5pm, they had recorded ten songs with Grammy-winning engineer and producer Alan Sanderson (Rolling Stones and others).

Drummer Jake Najor has also played with the Fire Eaters.