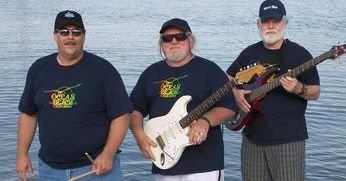 Originally known as Six Foot Set, and then Men in Blue, surf rockers Steve Phillips & the Pescadero Pickers was formed in Ocean Beach by friends who’d gone to school together. Though using only a sequencer for drums, they landed a slot as house band at Fiddler’s and at Sadie's/DVO in Warner Springs, as well as playing the Del Mar fairgrounds.

Steve Phillips grew up in Ocean Beach, and entered the local music scene in the late 1960s with his group, The Inmates. The Inmates was one of a handful of bands that played San Diego’s large dance venues popular at that time; the War Memorial Building in Balboa Park, San Diego State College, UCSD Elliot, OB and Santa Clara Rec. Centers, and others.

The Inmates teamed with songwriter June Jackson, and recorded in LA in 1967-68. Their single “This is the Day” on the Kopit label made local top-40 charts in many outlying markets. The Viet Nam draft effectively put an end to the Inmates in 1968-69. All members of the band survived the war, but never played together again.

Dennis Dobler grew up in the same neighborhood as Steve, and graduated from Point Loma High School one year earlier, in 1963. Although Dennis and Steve were loosely acquainted through surfing and a mutual friend, they never performed together.

Dennis too was drafted, and served a tour of duty in Vietnam. After returning from the war, he began writing music and performing in local coffee houses with Gary Grissom, also a guitarist and songwriter from the OB neighborhood.

Darrell Killingsworth grew up in Long Beach, California, and graduated from Richard Henry Dana High School. Darrell has played drums and percussion for numerous LA area bands over the years. He is also an accomplished guitarist.

An incredible turn of events brought Darrell into Steve’s world a mere two years ago. Darrell was welcomed to the extended Music Family that Steve, Dennis and other area musicians had been a part of for years. He was one of the missing puzzle pieces to what would later become the Pescaderos band.

Tommy Sanchez walked out of a dark backcountry night and into the Dodge Valley Oasis where the Pescadero Pickers were performing as the house trio. A local acquaintance approached Steve and asked if Tommy, his buddy, could set in on a harp number. Steve reluctantly agreed, and brought the stranger to the mike near the end of the evening. Tommy blew the roof off the place. We signed him to a lifetime contract. Tommy’s hometown is Escondido, California.

In 2009, the band appeared on a compilation album of OB bands, Waves. In 2010, they won the Reader's Famous Former Neighbors Song Contest.