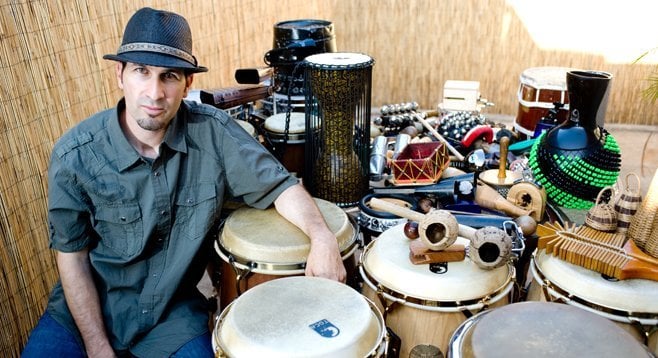 Native San Diegan Steve Haney has played with local groups such as Samba de Toquali and the Bi-National Mambo Orchestra, though his steadiest weekly gig for several years now has been with the Anthology band, Otro Mundo, and his own group Jungle Fire. Along the line, he’s also recorded and performed with the Brand New Heavies, the Greyboy Allstars, Ozomatli, Karl Denson’s Tiny Universe, Michael Franti’s Spearhead, and Jurassic 5.

The Mission Valley percussionist says his career has taken him to “wild and unexpected places. I got the opportunity to record with Stevie Wonder at his Wonderland Studios in L.A., and then I played with him at the 2008 Democratic National Convention.”

Asked how that came about,he says “I got a call from a friend that works with Stevie Wonder. He mentioned that he had an opportunity for me to record with Stevie. Stevie had an idea to present a new tune called ‘Fear Can’t Put Dreams to Sleep’ at the Democratic National Convention in Denver, Colorado, where he would volunteer his time to perform.”

Shortly before the event, Haney was invited to record the song at Wonderland, Wonder’s L.A. studio.

“I dropped everything I was doing,” says Haney. “Stevie’s idea was to present a multicultural drum ensemble groove. We recorded as a six-piece drum group with Stevie in the recording console room on keys and vocals.” Haney played tambourine, snare, and “more cowbell” on the track.

“Next thing I know, a few days later, I was on my way to Denver to perform live in front of 84,000 people [at the Democratic Convention]...we were essentially the opening band for Al Gore, who presented a speech after Stevie’s songs.” Other performers included John Legend, Sheryl Crow, and Michael McDonald.

Haney has also performed on the Oprah Winfrey show and says he was excited to shake hands with her backstage. “I even got to speak with president Barack Obama inside the White House, during a photo op, after performing with award-winning Indian composer A.R. Rahman.”

In late 2012, the percussionist told the Reader “I got a call from Tim Foley [Skelpin] asking to put together a 6-piece salsa band to appear on The Real Housewives of Orange County...we shot the show in Laguna Beach over the last week of November and it airs in a few months.” Other locals involved were Todd Davidson (piano), Antar Martin (bass), and Michael Duffy (timbales).