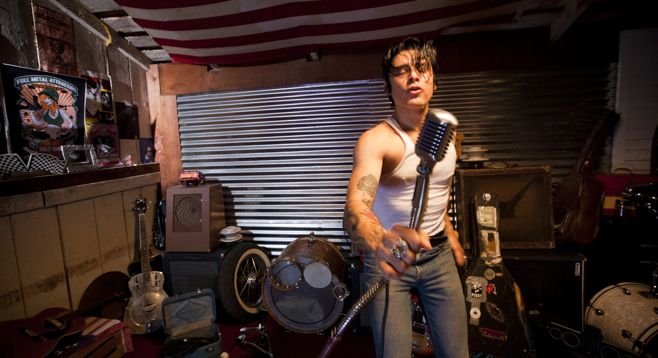 Born in Victorville and raised in San Diego, Stephen Rey says he is a vampire when asked how old he is. “I’m ageless.” In person, Rey is a picture taken from the pages of a book about ’50s truck-driving rock and roll. He is a rip-cord muscled rocker in a wifebeater with an air of menace and a roached acoustic guitar played through an amplifier that sounds as if on the verge of a blowout.

“I probably sound like I’m in diapers, compared to Link Wray,” he says. “I saw him in L.A. once. I hitchhiked up there to see him.”

Stephen Rey and the Slicks released their full-length Old Fashioned Future in summer 2011.

In 2012, Rey put together a new band called Sex Trash. Nathan Beale plays leads on an old Telecaster and Tim Lowman (Low Volts) mans a marching drum with a hubcap screwed into the side of it. Simple, primitive, but ferocious.

“It kind of haphazardly happened.” Rey and Lowman are roommates. Beale lives in L.A. (the two are also members of Lady Dottie and the Diamonds).

Anybody into hot-rod life will get what Sex Trash is about. “Was there a plan? No, it wasn’t planned at all. I have a propensity for old bikes and car culture that goes back to childhood.” Rey says he may have had images in his head, but that it just came out this way when he and the other two started playing songs in Rey’s garage. “I’m just trying to bring back some old sounds.”