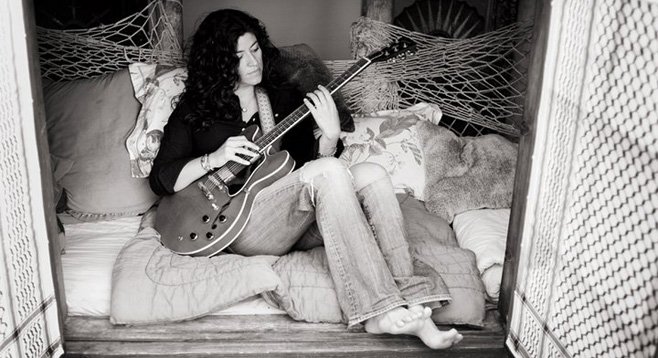 “When my parents split up, I grew up in two different parts of the country,” says singer/songwriter Steph Johnson. “I spent part of the time in Poway and part of the time in Arkansas...it was when I was in my 20s [that] I learned jazz voicings, because I wanted to sing over that sound.”

Johnson quit her job at a bank in 2009 to concentrate on being a full-time musician. “In 2008 the banks collapsed. The people I worked with started tripping, and they became afraid of losing jobs they hated. That’s when I realized that everything was all false.”

Her music is a kind of soul-blues fusion with jazzy overtones and an emphasis on original material. Whatever you want to call it, Johnson has one hell of a voice. It is smoky, sultry and powerful. She was raised listening to Aretha Franklin, Tina Turner, Ella Fitzgerald, Ray Charles, and Donny Hathaway. Not a bad set of influences.

She has flawless pitch, and the ability to transform a lyric into an emotional experience. She can get gritty and almost gravelly, and her range seems to navigate the space between someone like Cassandra Wilson and, maybe Etta James.

Johnson’s first album Genesee was nominated for a 2006 San Diego Music Award. Her song “In the Hood” -- recorded at Jason Mraz’s house -- won the 2008 Your Song competition.

Her 2010 album Mysterious Feminine won Best Jazz Album at that year’s SDMAs. “And it was an R&B album,” she laughs.

Not long after that, Johnson left the R&B and funk that had gained her a following and switched to playing straight-ahead jazz. “Some of my old audience has followed me, but some have not,” she says.

Then, her car was stolen on September 19, 2010. “Thankfully,” she says, “my car was returned. Gutted, but returned. I did however lose approximately $4500 worth of gear (amps, cables, mics) and, most devastatingly, an entire case of my recently winning album.”

She shot a video for her song “Thank You” on February 18, 2011, at Tango Del Rey in Pacific Beach. That Autumn, she was the subject of a cover feature for Kudos Magazine in Sedona, Arizona. Later that year, she debuted a new trio, featuring local jazz heavyweights Rob Thorsen on bass, and Richard Sellers on drums. She usually gigs with keyboardist Leo Dombecki and drummer Jesse Charnow.

How did this new trio come about?

“Rob and I met when we were both playing at the OB Jazz Festival this year, and became Facebook friends, which eventually led to some casual afternoon jam sessions. I shared some of my new music with him. He has really shaped them into something much more than I could have imagined. Richard Sellers came into the picture because my usual drummer was not available, Rob suggested that I call Richard, and I am so glad I did! Wow, the two of them together, calling out ideas, suggesting different sections...it’s like a dream come true for me.”

31 years old in 2012, Johnson drives a cornflower blue Volkswagen from generations past and has relocated from North County to a shared house in South Park. She plays all over the United States, and has shared the stage with jazz bassist Stanley Clarke and Latin percussion master Poncho Sanchez.

Released in early 2013, her third full-length Nature Girl was recorded with bassist Rob Thorsen and Fernando Gomez on drums. “They just took it up to a higher level,” Johnson says. “There's more harmonic things going on...they are not just incredible musicians, they're really good friends of mine, so we decided to do it again. It was an incredibly joyful experience. There was a moment when I actually checked out of my body.”

Her 2016 album Music is Art was produced by Kamau Kenyatta. “This is different. I mean, Nature Girl was recorded in two days. The new one was done in multiple sessions, with maybe two months just devoted to the vocals. I’d never done that, and I’m glad I had that opportunity.”