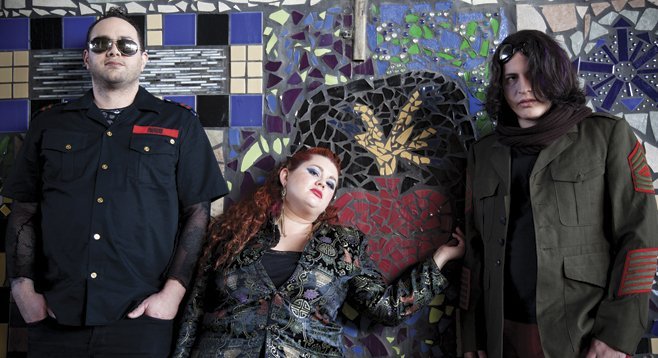 RIYL: Sisters of Mercy, Bauhaus, the Smiths, the Cure

“The first bass line I learned was Joy Division’s ‘Disorder’ in 1986,” says Starcrossed singer/guitarist Mark Haemmerle, aka Mark Starcrossed, who founded his band in 2001.

According to singer Christina Haemmerle (whose brother Dominic Balli is well-known in the reggae world), “Our sound is dark electro-pop, but with a twist.”

From the start, Haemmerle (who DJs under the name Horror Head) and company drew inspiration from life itself. “I used to deliver pizza for Round Table,” says Haemmerle, “and every time I got off freeway 52 and went into downtown La Jolla, there was either an accident or someone who almost caused one.” Thus was born the band’s popular sing-a-long anthem “All the Fuckers in La Jolla Drive like Shit.” Sample lyric:

“ 'Cause your car cost more, don’t mean you own the road
Best get off my ass, don’t make me lock 'n' load.”

“So I wrote a song about how shitty people drive in La Jolla. It’s not just people that live there; it seems to be everyone. I think, when you get in that area, it just seems to happen. For a video, I started collecting accident footage from every time I drive down there…I caught some footage of a fire truck and a police car at a two-car accident on the side of the road. I also got footage of the crazy traffic when one of the stop lights went out.”

Haemmerle (who admits a fondness for weird rockers like Wesley Willis and Captain Beefheart) has also written a song about the local suicide cult Heaven's Gate. "I was shocked and surprised when I heard about the Heaven's Gate cult, and I wrote the song shortly after it happened," says Haemmerle of "39 Dead." The song refers to the mass suicide that occurred in Rancho Santa Fe in March 1997. Eighteen men and 21 women took their lives at the instruction of music professor Marshall Applewhite, who'd promised his followers a comet ride into the afterlife with aliens.

"I heard it on the news today/ 39 people dead they say/ A madman had led them astray.../ Triangles on their faces and money in their hands/ he told them they would venture to faraway lands."

The band's music also includes clubby tracks such as “Discotheque Love Song,” which rings like Dead or Alive meets Sisters of Mercy, while “The Wishing Star Kills Tonight” (“All your sighing makes me cry/ all your crying kills the show”) is drenched in breathless beats à la the Motels.

Singer/keyboardist Christina Haemmerle (“When I was younger, I used to look just like Drew Barrymore”) frequently injects a bit of chick power into the proceedings (“If you need me/ call my name/ I won’t come running/ but I’ll show”), particularly on “Wind Up,” which sounds for all the world like a Jesus and Mary Chain outtake (“Never knew that being optimal/ meant I was more than the perfect doll”).

Their CD Samurai was released in March 2012.