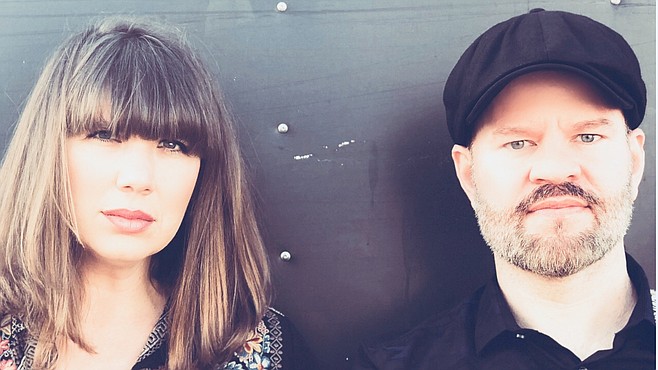 Founded in mid-2018, the Spiritual Motels feature veteran singer-songwriters Amy Day and Omar Musisko. "Omar and I met at a gig at the Holding Co in OB in May 2017, when I was performing with the Local and he was performing with the Peripherals," says Day. "I make it my solemn duty to always stay to watch the other bands performing when I perform, but I actually didn’t stay to watch the Periphs that night, because, that spring, my bandmate and songwriting partner in the Local was just about to move to Africa and I decided that my evening was better spent in the depths of despair over this. A few months later, with my former bandmate gone and the Local officially dead with his departure, Omar was looking to see if someone might play a bit with the Periphs on backing vocals and keys, which I could do."

Shortly after the duo began working together in the Peripherals, "I started using a music recording app called BandLab that Omar also used. One night after Periphs rehearsal, I came home late and listened to a new song called 'Serotonin,' incidentally, the first song on our album, that Omar had shared using the social function on this app. Even though I would never insert myself into someone else’s art uninvited, I couldn’t help but get on there and add a bunch of vocal and piano parts to this song I thought was so beautiful."

The Peripherals were a rock band. "But as I listened to more of the acoustic stuff Omar was writing, I realized that what came out of him very naturally was exactly the music I loved listening to and playing: relevant, heartfelt, honest, acoustic folk, but with innovative detail. My imagination was pretty quickly pulled in the direction of working with Omar on an acoustic project, because I could see my skills fitting so easily into what it was that he was creating. But I’d never in a million years have suggested to Omar that we start another band, because asking someone to start a band with you is the only thing more scary than asking someone to go on a date with you, and at that point Omar and I had only worked together for a few months. Fortunately, in one of those downright spooky moments of feeling like you create what you daydream about and somehow will it into existence, Omar soon raised with me the idea of doing an acoustic side project along these lines."

Within six months, the "side project" was playing three-hour shows in any and every venue around town. "Around that same time, the Periphs lost both their drummer and lead guitar player, so we both suddenly had the space to focus on the Spiritual Motels as our main project. We’re both really, really hard workers who pour a lot of energy into the creative projects we’re a part of; the harder Omar works, the harder I’m inspired to work on behalf of the band...I absolutely love the freedom of being in a duo, where there’s so much space to develop ideas and parts in the absence of a bigger group of people."

With dual co-ed vocals, in concert the band utilizes guitar, piano, mandolin, accordion, harmonica, effects, and live loops/loop pedals. "Don’t get me wrong," says Musisko, "I love playing in bands that make me want to break my guitar, are too experimental for most ears, and blend genres recklessly. That said, after playing in these bands I’d often find myself having a negative emotional response to people telling me 'That was rocking' or 'Killer.' I felt like is that what my songs are meant to do? So when Amy first added parts to my songs on Bandlab and I had the reaction of 'Wow, this is beautiful,' I knew we had something worth harnessing. Like, that’s what these songs are supposed to do."

Their 2019 album Super Tiny Disappearing Oceans was recorded, mixed, and mastered by Mike Kamoo at Earthling Studios in El Cajon. "After working together for this last year and a half," says Musisko, "Amy’s dedication and energy has brought these songs to life. I only half joke when I say that musically she’s the spiritual and I’m the motel."

"About this album," says Musisko, "don’t get me wrong, I truly love the studio. The layering, additional instrumentation, the experimentation. That said, by the end of every project I’ve done, I get so intense and critical of the music that I can barely tolerate it for, like, a year. Even then, I’ve never felt a strong drive to get the final project to the world. That’s different this time. This collaboration and album is one of the first projects I’ve felt proud of and that feels like it really has the power to resonate with others. I know it won’t be for everyone, but I believe there’s at least a few strange and beautiful people out there who are going to really connect with this one."

Day's former bandmate and songwriting collaborator from the Local ended up moving back to San Diego, and they formed a new band in 2019 called Shepherd Canyon. "The members of that band are very supportive of the work I do with the Spiritual Motels, as they understand how important it is to me."

Both Day and Musisko are longtime San Diegans. "I live in Tierrasanta," says Day (a law school writing professor), "where the best thing is that everything my family needs and everywhere my family goes is located within a three-minute radius of my house. The second best thing is that we’re a ten-minute drive from virtually every place I play music. The worst thing is that there’s almost no live music within walking distance."

"I live in Mission Valley," says Musisko. "Location-wise, it's pretty ideal. Food, shops, venues, work and my kid’s school are all near. That said, I have two small children, and we encounter some pretty shady folks around the river regularly."

Musisko's day job involves working as a School Psychologist. "There is no shortage of beauty and struggle in my profession, and really anywhere if you're looking. A lot of my songs come from there."