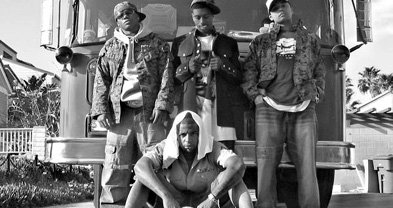 Ice Cube rapped about his AK-47, Bushwick Bill threatened Texas with a 12-gauge, and Warren G warned haters about his .44. But when Oceanside's SouthuNoyz raps about guns, they're the real deal. The four members -- Noyz, 3 Thirds, Yung Sip, and 7.K -- are U.S. Marines with combat experience in Iraq.

"A lot of rappers, they talk about guns, their gangs, and being in the street and how they feel like they need [a gun]," says founding member Noyz, a Marine corporal. "We've done search-and-destroy missions, ambush patrols, and things like that.... All of us have combat-action ribbons. I have two myself, but as far as guns go, we're about saving lives, not taking them."

In late 2005, SouthuNoyz released The Mason Dixon Movement, a seven-song CD. It opens with noise from a battle zone before jumping into laid-back raps with a Southern drawl. (The soldiers are from Texas, Georgia, Mississippi, and Louisiana.)

Noyz and 3 Thirds, a sergeant, met at Camp Pendleton and started SouthuNoyz before their first deployment in 2003. They put the group on hold when they were both sent to Iraq for their second tour. After they returned at the end of 2004, they added Yung Sip, a corporal, and 7.K, a lance corporal.

With few venues in San Diego willing to book rappers and hip-hop outfits, it's difficult for groups such as SouthuNoyz to get out of the studio and in front of an audience. SouthuNoyz got a boost when they were invited to perform for 50,000 Marines, sailors, and their families at Camp Pendleton's "Rockin' the Corps" concert in April 2005. As an opening act, they shared the stage with Destiny's Child, Kiss, Ted Nugent, Jah Rule, and Godsmack.

"Everything happened so quick," says Noyz. "We recorded in February and then played that show in April. It opened so many doors."