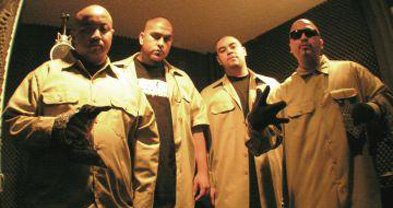 31-year-old Pizana passed away on July 7, 2009, from cardiac arrest following a bout with pneumonia.

“He was known for cracking jokes,” said Quimiro. “And he died during all the Michael Jackson memorial stuff...not one of us thought it was serious when we first got the news. No one would believe it. They thought he’d jump out of the back room and laugh.”

The quartet has been nominated for several San Diego Music Awards, including three nods for Best Hip-Hop Group (2003, 2006, 2008) and twice for Best Hip-Hop Album (2002’s Back to da Street and 2005’s Welcome to Reality). They released Rest In Peace Big Yikes and The Repedemic in 2010, both containing tracks paying tribute to a deceased crew member.

Quimiro, aka CooKoo, had a local hit with the 2010 football anthem "We Charge Hard."

In March 2011, on the the sixteen year anniversary of the death of NWA co-founder Eazy-E, they released an 8 track EP titled R.I.P Eazy (The EP).

In early 2012, they recorded a new X-Man Oldies Show intro, hosted by Xavier the Xman and subsequently heard every Sunday at 3pm on Magic 92.5 FM. Early the following year, they won the Groove International House Of Blues Take the Throne Hip-Hop Showdown, earning a headlining slot at the downtown HOB for Take the Throne 2 on April 11, 2013.