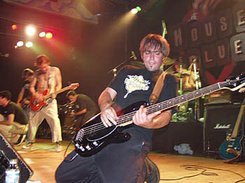 Their debut 5.5. was released in 1995, and they relocated to Ocean Beach in San Diego the following year. A live album, Beyond Seven, was released in 1998, followed by Nowhere Fast in 1999. After recording an EP with James Saez of Social Distortion, they spent 2000 and 2001 touring.

On April 2, 2001, VH1 debuted a competitive reality TV show called Bands on the Run. The concept was to have four unsigned bands compete for a prize package that included $150,000 in cash, equipment, a showcase before industry execs, and a professionally produced music video to be aired on VH1. Of the four competing bands was Soulcracker.

“Bands on the Run made us more successful,” says drummer Bob Hamel. “We got tons of radio play and played sold-out shows across the country.”

In addition to the national attention Soulcracker enjoyed as a result of being on Bands on the Run, the show also handed Soulcracker one of the most blatant screw-overs in the history of reality TV.

“Because of the business I’m in,” says Hamel, who is a visual-effects producer for the Vampire Diaries, “I periodically run into crew members from Bands on the Run. They always tell me it was fixed.... We lost because we were supposed to lose, and looking back, I feel so good about that.”

In a nutshell, BOTR was a touring competition, during which the four bands would travel from city to city and try to earn money by selling tickets and merchandise. The band with the most money by the end of the 15-week, 11-city tour would win the prize package. The finals came down to Soulcracker and a pretty-boy pop-rock band from Dallas called Flickerstick.

“Flickerstick was a radio-friendly, mainstream rock band,” says Hamel. “But we were all over the place, musically, and cast as the bad guys, which is funny because Bands on the Run was just this game show we were trying to win...we had no idea that anyone could [be made] to look bad or good on a show like this.”

Going into the final episode, Soulcracker was ahead by over $3000. However, the producers arbitrarily added a $5000 purse to the winner of a battle-of-the-bands event, rendering the first 14 weeks of the contest meaningless. In a turn of events that many observers deemed as “highly suspicious,” Flickerstick won the battle, the purse, and, consequently, the contest.

“Whether or not it was fixed,” says Hamel, “the show opened many doors for all of us. We toured the country, made some good money, and got to be rock stars for a year.”

After the TV show, they made one last record, At Last For You, before splitting in 2003. Sutton Althisar formed the band Ragsy. Bob Hamel and latterday guitarist Ramsey Fauset formed Safety. A.P. Murray started writing songs for TV shows and joined Darlings of the Day, while Beastie Ulery began directing short films.

Also, don't forget that VH1 decided that, unlike previously stated, the Battle of the Bands on Bands on The Run would suddenly have "industry people" voting along with the fans. Originally it was just going to be the fans voting, and they threw in the "industry people" to guarantee that Flickerstick would win. If I recall correctly, each fan vote was worth exactly half of an "industry" vote.

We tuned in on the second episode, and I told my wife the exact order the bands would be voted off of the show, it was that fracking obvious.

Good to hear that Soulcracker is still playing, I had thought they broke up. Keep up the good work guys! I've been watching since the time Sutton got buck naked on the stage at the Monte V in Flag. You're still one of my favorite bands.