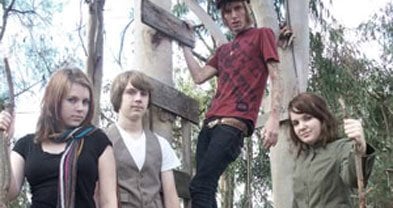 Sorrow Underfoot is a Christian band featuring Fallbrook sisters Brittany and Shannon Taylor and their brother Justin on drums. “The mission of Sorrow Underfoot is to reach out to teens and challenge them about the pop culture and lifestyle that surrounds them,” according to the band’s MySpace page. Their Epicentric EP, released July 2008, was recorded at Red Crosby Studios.

The band has made several tours of Russia as part of the Calvary Chapel Church’s Planting Missions program. “I promise we are not emo,” says the band on its website, which includes Russian tour diaries from the bandmembers.

Snegiri: “It was a bit of an ordeal getting here, with a six-hour delay in LAX due to the snowfall in Moscow,” writes Shannon Taylor (22 at the time). “We traveled up to Tver in our van. Russian drivers are known to be crazy. At one point on our way up our van got sideswiped by another [vehicle] when both were trying to pass head-on! If we had been any closer, it could have been fatal. All the damage included was the side mirror being ripped off and scratches along the side and windows.”

Outtake - Tambov: “One of our dear new friends is Sameh, who is an immigrant from Palestine and a Muslim, and attends the university in Tambov. After many conversations…Sameh prayed for salvation and happily carried around the Bible we gave him, right up until we left.”

Kaluga: “It was probably the smallest turnout we have had…because of the location of concert hall, time of year, and the weather. At first I was discouraged by this. At the starting time of the last concert night, there was no one there except one old man.”

The gig eventually picked up, and “as we boarded the train, the youth of Kaluga stood out in the negative-five [degree] weather to see us off. One little girl was shivering as she waited to see us off, standing at our train window with her friends, smiling and blowing us kisses. As our train pulled out of the station, two Russian boys ran along side of the train until the end of the platform.”