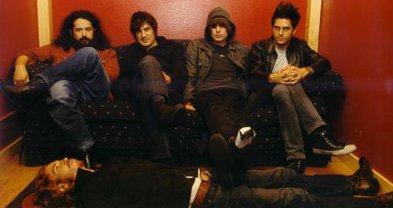 Some Girls is a hardcore punk/mathcore group comprised of members of the Locust, the Plot to Blow Up the Eiffel Tower, Give Up the Ghost, and Unbroken.

They play punk-influenced music similar to bassist Justin Pearson's other band, the Locust. After recording two EPs, they released their debut full-length All My Friends Are Going Death in 2003. They released The DNA Will Have Its Say EP in 2005 on Pearson's record label 31G Records. In January 2006, they released a second full-length album, Heaven's Pregnant Teens, produced by Alex Newport on Epitaph Records.

According to Pearson, while touring Europe in 2006, "One young lady [in Vienna] who had been acting like a moron for most of the set managed to make her way up to the stage and put her hand on Wes [Eisold]'s face as he was singing. It's a goofy move, as well as irritating. Wes spat at her without hesitation.

"It was an odd mixture of language barriers, baditudes, and confusion. Apparently, Wes and myself were labeled sexist for Wes's actions. We were told how we're not welcome there and to get our shit out of the venue...it was only spit. At this point, we're hustling to get our stuff out and are hassled in multiple languages by other women who were not even part of the event."

In France, even the sightseeing was a bust. "Unfortunately, we couldn't locate the Eiffel Tower, even though it's the largest monument in the frickin' city," says Pearson. "The plot to see the damn thing is lost in a confused drive that consisted of an irritated driver, drunken passengers peeing out the window and yelling 'Kermit' at the locals, and throwing bottles of beer at rude Frenchmen."

Some Girls singer Wes Eisold is credited as the co-writer of three songs on Fall Out Boy's CD, Infinity on High. However, he didn't help write any songs on that album.

Reportedly, Eisold was given publishing and songwriting credits as part of an out-of-court settlement. The credits should have been on Fall Out Boy's first disc, From under the Cork Tree. Eisold never gave Fall Out Boy permission to use the lyrics he wrote and performed with his old band American Nightmare.

"Pete Wentz is supposed to be the mastermind of Fall Out Boy," says Eisold's Some Girls bandmate Justin Pearson. "But I don't know how much of a mastermind you are if you're just stealing someone else's lyrics."

Eisold, who moved Philadelphia, still sometimes toured and recorded with Some Girls. Nathan Joyner went on to play with All Leather, Hot Nerds, and Ese' & Zain. However, while walking home from work in September 2012, he was hit by a car while crossing Washington Street at Cleveland in Hillcrest. His girlfriend and bandmate Alia Jyawook (Hot Nerds, Vaginals, Ana/, Kata) says the police report clocks the car at around 35 miles per hour. Joyner suffered life-threatening injuries, including a serious head wound. Several local benefits were staged to help him raise money during his lengthy recovery.

In 2019, Joyner teamed with Eric Paul and Paul Vieira, from Rhode Island band the Chinese Stars, to form a new group, Psychic Graveyard, who debuted a release called Loud As Laughter.