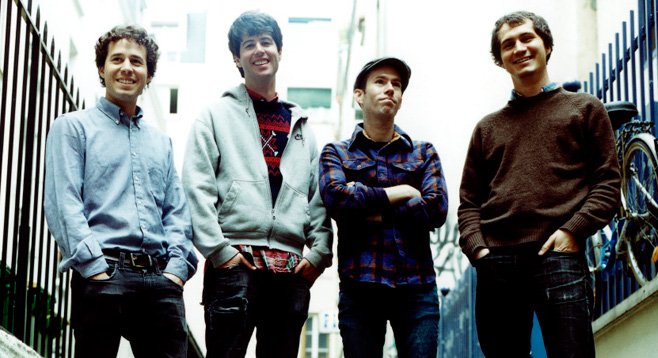 Originally known as the Muslims, the Soft Pack formed in 2006, fronted by singer/guitarist Matt Lamkin and bassist Emily Neveu, who sang and played guitar and keyboards with The Clock Work Army. She learned the bass in order to join the Muslims. The band released a five-song demo, recorded in a band member’s bedroom.

Drummer Gabe Patuzzi came from the band the Holy Boys.

Matt Lamkin (who writes most of the lyrics) and guitarist Matty McLoughlin grew up together in North County. They recall that they didn’t think about playing music when they both went to Torrey Pines High School in the late ’90s.

“I didn’t feel the need to play in some jerkoff punk band,” says McLoughlin about the musical tastes that dominated their high school. “The kids who did listen to music when I went there were dorks. They were Huey Lewis as f-ck.... I liked the Replacements. The rest of the kids were into the Swingin’ Utters. I was busy getting my college paid for [earning a baseball scholarship].”

Lamkin and McLoughlin came back home with college degrees but without career plans. They decided to start their first band in January 2007 while delivering pizzas. After their first gig at the Beauty Bar, the Muslims became Casbah regulars and gigged in L.A.

“I’m surprised we’ve gotten the attention we have [without] playing the game,” says Lamkin.

Lamkin and McLoughlin then essentially restarted the band, adding new members Brian Hill and David Lantzman. As of 2007, all four band members live in L.A.

“Some [bloggers] have accused us of being too good for San Diego,” says McLoughlin. “It’s not like we’re abandoning San Diego; it’s just that we don’t want to depend on our parents anymore or work at some record store.”

“I got a job connected with my degree [in film],” says Lamkin. “It’s not like we’re moving up there to get signed.”

Lamkin told Vice magazine, “Most of the band recently moved from San Diego to L.A., and I think L.A. is pretty cool because it has a bigger all-ages thing going on. In San Diego, it’s pretty much just the Ché Café, but it depends on who’s working there. There are just more bands in L.A. so you get a lot more bullsh-t but you also get a lot more good stuff.”

At the 2008 San Diego Music Awards, the band was mysteriously nominated for Best Album, for a two song 7-inch record with "Extinction" and a cover of "My Flash On You," by Arthur Lee and Love. They lost.

In November 2008, the Muslims announced it was changing its name to the Soft Pack. In January 2009, NME Magazine wrote a feature about the band, whose debut single in the UK was "Nightlife" b/w "The Bright Side," on Caspian Records.

February 2009 saw the Soft Pack visiting the UK for the first time, as well appearing at the Primavera Sound festival in Barcelona, Spain. A year later, they released their self-titled debut full-length album. October 2010 saw them playing the famed Austin City Limits Music Festival, along with around 130 other performers.

Following the two and a half straight years of touring that came both before and after 2010’s self-titled release on Kemado Records, the band were burnt out but determined to take control of their future. They decided to self-produce their follow-up, to be released by Kemado’s sister label Mexican Summer.

During the previous sessions for their self-titled album with producer Eli Janney, they developed a dozen songs and recorded all of them. Ien of them made it to the album, the other two became B-sides. In contrast, while making their 2012 full-length Strapped, they created eighty demo ideas, recorded thirty full songs, and then picked their adozen favorite ones for the album, no matter how far out they were.

When released in September 2012, Strapped received only a 6.8 rating on the Pitchfork website. Matt Lamkin and his girlfriend moved down to Ensenada, and the band eventually split.

Matt Lamkin's debut solo vinyl album, the experimental Where I’m Matt, was released by San Diego’s Volar Records in early 2017. A couple of the songs harken back to the more straightforward, garage-tinged rock of the Soft Pack, while the remainder veer all over the map — which is exactly how Lamkin recorded the album.

“It’s one thing to make a lo-fi album and one thing to make a hi-fi album, but I think it’s cool to mix it. I just like the variety of it,” he said. A chunk of the collection was recorded in San Diego at Electricalifornia, while the remainder was completed at homes and studios near Ensenada.