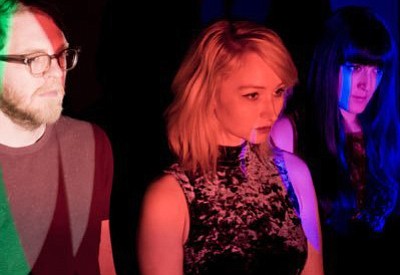 Said Liscomb at the time, “It will be mainly a digital release. However, if you attend one of our shows, you can get a copy of a limited-run ’zine we are printing to go with the EP containing artwork and lyrics from the band...the songs are intimate in perspective and vary in sound from sparse arrangements to heavy psych.”

“For me, the band has become a highly functional creature that started with just a lot of fur and claws, but now is growing paws and a strong tail that all three of us move,” says Pratt, whose lilting background vocals provides a saccharine counterpoint to Liscomb’s nasally admissions.

Their Earth Energy EP was released in June 2014. “I had a personal breakthrough and I made a conscious decision to be more open and vulnerable in my songwriting and in performances than I have ever been,” says Liscomb. “I also wrote some songs that are still so raw they scare me.”

The EP release was followed by a video for EP opener “Diary,” along with a ’zine of art and writings by Liscomb, Pratt, and drummer Jon Bonser. Their EP Spellbreaker was released via Velvet Blue Music on July 7, 2015. Later that summer, keyboardist Pratt was replaced by Ana Ramundo.

They spent most of April 2016 recording a new EP at Tiny Telephone Studios in San Francisco, with John Vanderslice producing. XOXO was released in October 2016, preceded by a single for "Run In Dreams." A video for the track directed by !ZeuqsaV! is a hazy, blissed out dream sequence. Videos were also produced for "Freeway" and "Digital Girls."

Megan Liscomb introduced a new aka in 2017, P.J. Sparkles, a lo-fi dream pop recording project. Her debut Sparkles album Neon dropped in early 2018, recorded at Earthling Studios with Mike Kamoo, who also played drums and cello. Around the same time, she began playing around town as a new member of Hexa, alongside Carrie Gillespie Feller (Ilya, Hours).