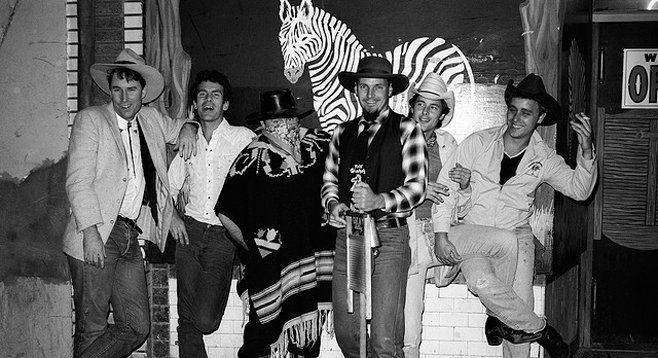 “We all had ‘Dick’ names, too,” recalls Del Pesco Montana. “It was a real wild time, especially at the Spring Valley Inn on Sunday nights!”

Best known from the Beat Farmers, Montana’s wisecracking persona helped make their tune “Happy Boy” a Doctor Demento radio staple, until his onstage death from a heart attack on November 8, 1995.

The band’s theme song “Bunny Call,” from their Adventures in Paradise album, began as a different number. According to Roper, “I came to rehearsal one day with ‘Cattle Call,’ a song I used to sing in a duo. Nobody liked it, but Country Dick loved it and announced in his deep voice, ‘I’m doin’ that song, and it’s now called ‘Bunny Call’... He also took another song I did, ‘Maverick,’ and turned it into ‘Country Dick.’”

Skid Roper here. Just a clarification: Richie Rooster was NEVER a member of this group. It was Nino del Pesco in the pancho who played bass and Robin Jackson to his left on vocals and acoustic guitar.