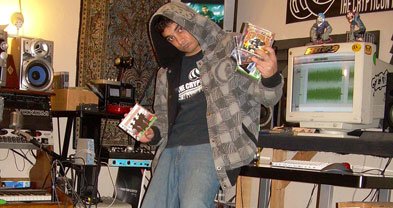 Local DJ and Crypticon Records label head Snaps Provolone got his musical start in middle school, with a rock band called the Deviants.

“I played lead guitar, and not too well at that! We played parts of Poison’s ‘Talk Dirty to Me,’ Jane’s Addiction's ‘Jane Says,’ Metallica’s ‘One,’ and Skid Row’s ‘18 & Life,’ among other bits of songs none of us ever cared enough to finish learning. It was all about playing something and actually having drums and amplifiers and making noise. We all split fifty dollars for playing absolute crap at a party, and that was the moment where I realized you could actually make a buck messing around with music.”

Provolone made his first inroads into the San Diego scene by creating graphics for Suburban Noize Records and the Kottonmouth Kings crew from 2000 to 2003. “I was a fan first, and then got to work for them through my friendship with Zinger at SRH. I even got to have meetings inside the Capitol Records building for official graphic design work, and I learned how to do complete album art layouts.”

So why do DJs make up pseudonyms, rather than use their given name?

“Hiding behind an alias is a fun and elusive feeling,” says Provolone (not his real name). “Making up a name allows us to roam free as artists and jump into projects and live vicariously through new alter egos. Aliases induce a sense of mystery.”

Provolone founded the San Diego DJ-themed Crypticon record label in 2001. “I encourage all Crypticon artists to pick funny names. For instance, anyone who wanted a beat on the Italian Smoke Squad album had to have a mobster name.”

The 34-year-old — who graduated from UCSD with a BA in multimedia production — declines to provide his real name for print. “It helps build a puzzle, like Bruce Wayne and Batman. I literally have 20 other names for myself, and most have been used in print for something or other. It [a pseudonym] also helps protect me and my family, in case I get crazy on an album or project.”

As for the ongoing debate over DJs creating “new” works from unauthorized song samples, “Call it an homage or a shout-out or simply a mutation of the original-source sound. Things like bootlegging are wrong to me. The direct reproduction of a work for sale is not a good thing, but appropriation and sampling is one of the key ingredients to great hip-hop music.

“The question of DJ originality has haunted the movement since its inception. However, each sound is carefully chosen, manipulated, created, defined, oscillated, transformed, pushed, distorted, echoed, gated, and flanged for the best tone for its given intent. The rearranging qualifies as a new creation.”

In addition to producing, DJing, and designing graphics, Provolone also plays with The Italian Smoke Squad. There is another project he would like to realize someday...

“I do have a dream about creating a live stage band. I’m looking for a Chuck E. Cheese to go out of business, so I can buy up all their freaky musical robots and then assemble them on stages in new costumes. With this musical-robot army, I could program each one to play the instrument of my choice, and the Cyborg Symphony would begin!”

And if the music biz collapses entirely, he has a backup plan. “I’d like to have some of my original scientific theories taken seriously and published. For example, how leprechauns were really alien ‘little green men’ mining gold on Earth, only to be misinterpreted by drunken Irish storytellers.”

That, and “I have this urge to take a long time carving a canoe out of a redwood tree.”