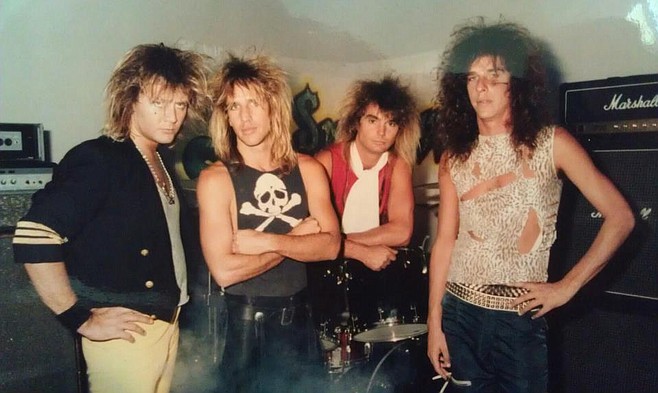 Originally known as Mayhem, Snakebyte was a 1980s hard rock band based out of a soundproof basement on Arden Street in Encinitas. The definitive lineup featured Wally Passet (King Neptune), Andy Milner (son of Adam 12 actor Martin Milner, who served as the band's manager), Jonny "Coffin" Ferrari, and Kurtis Anton (whose dad ran Little Bavaria House in Del Mar in the 60s and 70s, as well as drumming with Del Mar band Polka Pals).

The band recorded early demos with producer Bob Bishop, as well as an EP released in 1986 and featuring the song "La Paloma," written about the La Paloma Theater in downtown Encinitas where they frequently played. The EP was produced by Ben Kay Intl. of Canada and mastered in L.A. by Bernie Grundman. Their 1986 tour included an opening slot for Armored Saint at a in Salt Lake City Coliseum, and their single "She’s A Witch" was heard on radio stations like KPRI and KLOS.

Milner and Ferrari moved to Hollywood to study at G.I.T.

Snakebyte split in 1987, though they later appeared on a 2013 compilation called Venomous, issued by FnA Records and featuring many bonus tracks. Wally Passet went on to form Wally World.