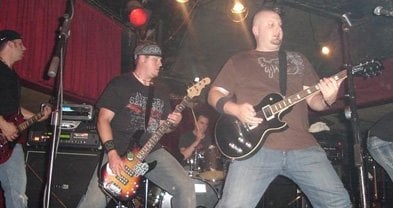 "All my favorite bands keep putting out albums that I can barely listen to," says Russell Logan, singer for Sliver. "It feels like a sad market where one-hit wonders exist because of the Internet, and bands that should have barely been one-hit wonders get three hits off a CD because it's shoved down our throats. I'm wondering if there will be an epic band again, one that survives for a long time, like some bands used to."

"I expected current music to keep going to crap until we actually find the Next Big Thing," says guitarist Mark Miller. "The same way everyone keeps waiting around for the next Nirvana. I can't even fathom the long run of music. I can't imagine what things will be like 50 years from now. Maybe it'll be like Demolition Man, where censorship has limited us to only listening to radio jingles."

The band describes their instruments:

Jon Shimmin, drums: "I play a Yamaha Rock Tour Custom set. It has what they call square drums -- they're as long as they are in diameter and have a sweet tone when all miked up. I purchased this set in around 1992, and it has seen many, many shows...Zildjian, Sabian, Wuhan cymbals. DW double pedals."

Mark Miller, guitar: "Gibson Les Paul Standards. The Gibson Les Paul signature model is among the most recognized solid-body electric-guitar designs. It was developed in the early 1950s and has become one of the most enduring and popular musical instrument models in the world. Its design has been left virtually untouched for nearly 50 years."