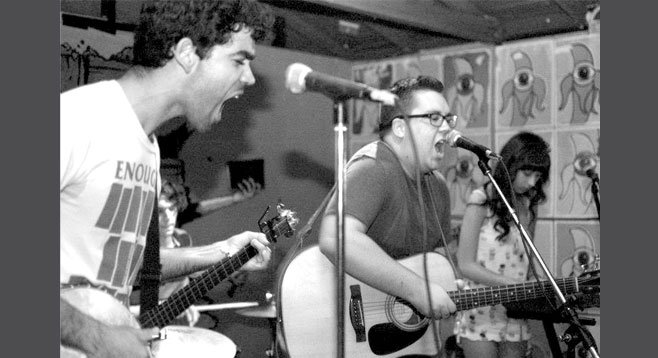 Folk-punk rockers Sledding with Tigers are fronted by Dan Faughnder, who played percussion in the Rancho Bernardo High School Band and later interned at an L.A. music publishing company. Returning to San Diego, he formed the band with backup courtesy of local talents like Bogsey and the Argonauts bandleader Brandon Boggs, a multi-instrumentalist who has also played with KIDS, Grrrlfrrrnd, and sx$X$xs. The group is filled out by Sam Juneman (violin), Robert Martin (banjo), Taylor Brough (accordion, mandolin), and Ben Levinson (double bass).

Most of their early music was released online for free, such as their Not the Beatles Yet full-length and the Being Nice is Still Cool EP.

Their debut album A Necessary Bummer (Antique Records) was released in April, 2014, preceded by the singles “Not So Body Posi After All,” “Handshake (Never Take Relationship Advice From the Lead Singer Of A Pop-Punk Band),” “The Devil and a California Burrito Are Raging Inside Me,” and “Oh, Right, Damn, It.” A vinyl version of the album was released in May, with a limited pressing of 500 copies split between two variants (400 black and 100 blue & pink).

Over the first weekend of August 2014, the band was involved in a car accident while traveling between Oklahoma and St. Louis on his US tour. Thankfully, no one was injured in incident, but the band's vehicle was totaled. As a result, all remaining tour dates were cancelled. The vehicle involved in the accident was also frontman Dan Faughnder's only means of transportation. As he explained in a new letter to fans:

"Hey guys, it's me, Dan. A few days ago, my friend Nick and I headed out on our first midwest tour. I'd done two California tours, but this was our first time going across the country. We made it two days, and then fate took it's ugly hand and punched us in the Touring Band Kidneys. On our way from Guthrie, OK to St. Louis, the car hit a bump and swerved out of control. I had dozed off in the passenger seat and woke up to the screeching sounds of rubber and hot asphalt. We hit a guard rail and flipped a car, eventually landing on the side. I have a few cuts and scrapes, but nothing too awful, and we walked away from the accident. Unfortunately, my car did not."

A video for “Not So Body Posi After All,” from their debut album A Necessary Bummer, features the band performing at a house party filled with friends, all dressed in their underwear. Their album Not the Beatles Yet was re-released on vinyl on January 27, 2015, in a limited edition of 300 copies (125 on rainbow splatter vinyl and 175 on black).

Summer 2015 saw the release of their Space Jam themed album, Come On and Slam. The record features seven original songs, each inspired by the popular animated film, and when played in order the tracks tell the plot of the movie. The first single from the album was titled "Take It From Me, Michael Jordan," followed in July by "Retirement."

The project essentially evolved over a dare about a tweet. Says Dan Faughdner, "Halfway through this process, I think I really started to regret ever telling anyone that I would write an entire concept album about Space Jam, but now, I’m actually pretty stoked on it. I think I might be the only person self-centered enough to take the plot of a 90s children’s movie, and end up writing a bunch of songs that are secretly about myself. I really hope people like it, but the most important part is that my friends and I had a ton of fun making it."

In July 2016, the band announced it would relocate to Los Angeles, with singer/songwriter Dan Faughnder transferring to the School of Rock in Pasadena.