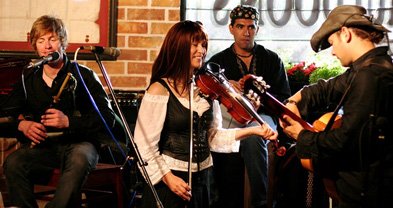 Skelpin' is an Irish folk group that fuses Celtic music and Spanish flamenco. In 2003, 2004, and 2005, they were nominated for a San Diego Music Award in the category of "World Music."

The band was founded by female fiddler/singer Patric Petrie and multi-instrumentalist Tim Foley, originally backed up by flamenco guitarists David and Hector Maldonado and Middle-Eastern percussionist Rowshan Dowlatabadi. The latter three players have since left the band.

Though Tokyo might not seem like a stronghold for Celtic music, Skelpin' reports otherwise. In 2005, the band did a three-month stint at Disney's Tokyo Sea theme park; the band was asked to return to headline the Tokyo Irish Music Festival in March 2007.

Petrie describes Skelpin's initial visit to Japan. "We had people who showed up for every show and who would wait for us at the train station on our way home. It didn't matter if they had never heard Irish songs. They're just a very sophisticated audience that loves all kinds of music."

She recalls the night her skirt flew off mid-twirl during a performance at downtown San Diego's St. Patrick's Day street fair: "I was in the middle of playing a fast tune, jumping all around, and couldn't stop to grab it."

At a corporate gig in 2006 at the Embarcadero Marina, Petrie's wirelessly miked fiddle slipped from her hand as she danced. Because she was still in motion, Petrie inadvertently dropkicked the instrument into the audience. No one in the crowd thought to catch it; everyone moved out of the missile's way. "It was like watching the Red Sea part," Petrie says with a sigh. "I'll never forget the sound it made when it hit the concrete."

Skelpin' is also associated with the Greening of the Gaslamp, a local Irish-culture awareness group. Tim Foley played pipes for the movie Master and Commander: The Far Side of the World.

The band's 2009 album A Trip to Skye (Blindspot Records) was produced by Alan Sanderson (Stones/Weezer) at Studio West and features guest player Matt Hensley, of Flogging Molly. One song from the album, "The View" (written by the bands Tim Foley), won the World Music category in the 2009 John Lennon Songwriting Contest. The album itself won Best World Music album at the 2010 San Diego Music Awards.

In early 2016, fiddler Patric Petrie joined former Steve Miller Band guitarist Greg Douglass at Earthling Studios, to play on several tracks for the new album Douglass was recording with Mike Kamoo (the Loons) at the board, though her contributions were ultimately scrapped.