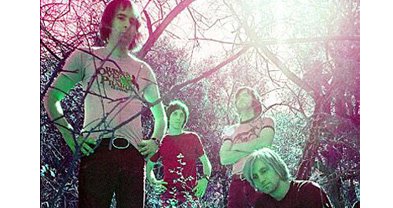 Sound description: Psychedelic and progressive pop-rock. Songs sound like mildly crazed pagan folk music, furiously performed by several small species of furry animals gathered together in a cave and grooving with a pict.

Current Status: In February 2007, Silver Sunshine changed its name to Astra, which is also the title of an album by a performer they cite as an influence: Freedom's Children.

You're not having an LSD flashback. The psychedelic sounds of Silver Sunshine come courtesy of guitarist Richard Vaughan, bassist Stuart Sclater, and guitarist/organist Conor Riley, who frequently whips out a vintage Mellotron, just in case anyone misses their intent to supply the missing link between Rubber Soul and Radiohead. Recently recruited drummer David Hurley (formerly of Dura Mater) brings his own flute and a fully operational sci-fi Moog synthesizer to the acid-drenched analog party.

The band formed in 2001 and is currently recording for Rhode Island-based Empyrean Records. "Our music is sometimes heavy, sometimes gentle, but always freaked," says Vaughan. "Lately we've been digging on heavier, progressive, and wyrd-folk sounds."