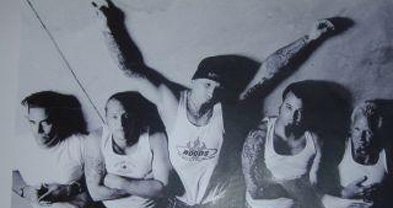 Launched in 1995, the Shot Out Hoods have opened for the Dead Kennedys, the Dickies, the Exploited, Fear, and the Adolescents. The band played from 1995 to 2003. ("Until I had to go away for a while," says Hood.) The band's reputation for being composed of "devil-worshipping, satanic, heroin-addicted junkies" was due to Hood's perspective and lyrics. His most famous stunt may have been when he doused a Bible with lighter fluid, lit it on fire, and threw it into the crowd at the Sports Arena.

"I liked the darker side," says Hood. "I switched over, but I still sing about the same stuff. I didn't change my lyrics; you just can't change your lyrics to the songs."

After playing guitar for years with the Shot Out Hoods, the Suicide Kings, the Cutthroats, Redeye Gravy, and Unregistered Sex Defenders, the 50-something Hood says, "I don't know how much longer I can be a rock-and-roll star. I'm moving into comedy."

In his band the Dukes of Haggard, formed in 2005, Hood's songs are about things like large women and bike-riding meth addicts. "I insult women, homosexuals, and drug addicts...especially tweakers. They are at the low end of the food chain," says Hood, who admits he's a recovering addict.

He writes all the words and music for the Dukes of Haggard. Sample lyric:

"Down in San Diego none of my friends say they're gay / but every year there's another million at that rainbow parade."

"We're just making good fun at how fucked up our society has become," says Hood. "I'm not leaving myself out [of the insults]."

Hood says the Supersuckers and Southern Culture on the Skids inspired him to move into comedy. "So many bands are so moody, so serious. They just stand there and stare at their feet. I talk to the audience."

On December 22, 2007, the Shot Out Hoods played their first gig since 2004, at Brick by Brick. They were still doing occasional local gigs as of summer 2008, including headlining a double-bill with Sprung Monkey at Winston's on July 19.