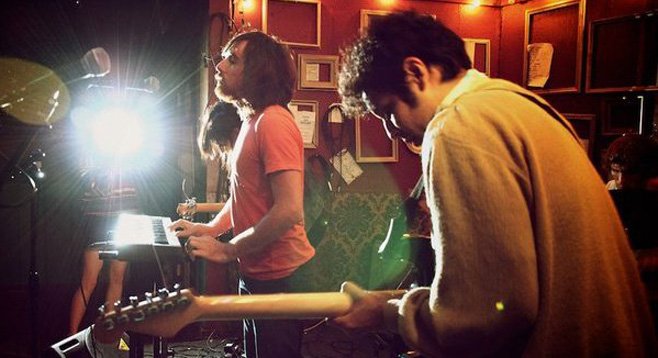 The group played their first show in November 2010 at the Tin Can Ale House. Many of the shows have been with ’77-style punk band the Last Years, with which they share a practice space in Mira Mesa.

With keys and guitars (one clean, one with Big Muff distortion) filling out the bottom end, Shiva Trash carries the garage-punk energy of the Sess and Atoms to a more psychedelic, shadowy place, which Jimenez calls “dark surf slash punk slash weird.” Think the Velvet Underground, Wharton Tiers, Thee Oh Sees, and early Stereolab. Lyrics tend to revolve around occult themes inspired by ideas from sources such as the film Holy Mountain and author Aleister Crowley.

“It’s imagery,” says Rivera, “and ideas like the union of opposites. It’s about throwing yourself in the coals and molding yourself into what you want.”

Jimenez has an illuminati stick-and-poke tattoo on his forearm, which mirrors the triangle and eye pin on Phelps’s jacket. Having recorded their early tunes at Pandemonium Recorders, they've been known to play at Dragon Rojo in Tijuana. “J.J. and Branden were terrified the last time we went to TJ, like, they were going to be shot on sight,” Rivera laughs. “But, it’d be cool if more people went down there. It’s super relaxed.”

Not all gigs go swimmingly, according to Rivera. “Our worst show had to be one we had at Tin Can Alehouse. We played a pretty sketchy set as it was already, but what's worse is that I broke a string during the first song! Then there was an awkward period of time where I was asking people at the bar to borrow a guitar. I finally got one and only after a couple of songs Lisa breaks a string, too! Someone was rad enough to bring their guitar out during the song and we were able to bounce back pretty quick. Then, after a couple more songs, I broke another string!”

“By that time, we had had enough and quit playing for the night. We felt there was something in the air that didn't want us playing that night, anyway. It was pretty awful. We apologize to those who were in attendance.”

Keyboardist Branden Parish left the band in late 2011 to form a new punk group, Sculpins. He was replaced the following year by Sal Esqueda. Their debut EP was one of the first releases on the local Cholo Punks label.

A new split 7-inch with PoolParty was released in July 2013, “Helter Swelter” b/w “122 Hours of Fear” (the latter covering a song by the Screamers) was recorded during the winter of 2012-2013 at Faded Studios in Chula Vista and engineered by Adam Buchbinder before being mastered by Joe Goodwin at local Capricorn Studios. It was released by Palm Dreaming, a project of Phelps and Rivera, in association with Cholo Punks.